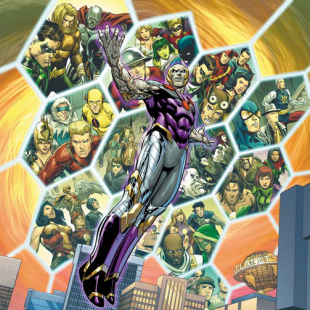 DC will publishing mini-series based on Superman, Batgirl, Harley Quinn and more as part of its planned Convergence event.

DC Comics has a long, complex history that has led to some of the most varied and occasionally confusing lore in the industry. One constancy of the company’s existence however, has been its tendency, every now and then, to produce massive stories with universe altering implications. The most recent of these, of course, was the introduction of the controversial New 52, a partial universe reboot that left many longtime fans of the publisher upset as they were forced to bid farewell to some of their favorite moments and character incarnations.

Perhaps hoping to ease some of the pain from the changeover, DC recently announced that it would temporarily be halting its regular release schedule next year to focus on a new event that it’s calling Convergence. A nine-part series accompanied by a whopping 40 two-part mini-series, it aims to explore the different universes of DC’s past by transporting characters from different timelines (via way of Braniac) to a single world where they’ll face off against a new villain: Telos.

Today, in turn, DC revealed the identities of the first ten mini-series it intends to release for the event. Among the first to launch will be Superman, The Atom, Batgirl, Nightwing/Oracle, Titans, Justice League, Question, Batman & Robin, Speede Force and Harley Quinn. Seeing as these books will focus on older versions of their title characters, readers can look forward to revisiting characters like Stephanie Brown as Batgirl and plot points such as Superman and Lois Lane still being married. These books will be written by a number of DC veterans including Greg Rucka and Gail Simone who will be covering The Question and Nightwing/Oracle, respectively.

All in all, while this still isn’t likely to wholly please longtime DC stalwarts still steaming from the re-launch of the publisher’s universe, we could still see this being an appreciated re-visitation of those characters and storylines that many readers spent years following. Convergence is currently slated to launch in April 2015.

Joining the Nightbreed: Inside Clive Barker’s House of Dark Delights