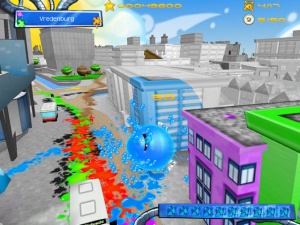 PC independent title De Blob is being brought to the Wii and DS courtesy of THQ.

De Blob, the cult internet hit, is being developed by Australian studio Blue Tongue Entertainment and published by THQ for the Nintendo Wii and DS systems. Originally developed by a team of nine students at Utrecht School of the Arts and Utrecht University in the Netherlands. Controlling a large ball of ink, players will bounce around Chroma City in order to restore color to the city that was drained away by the I.N.K.T. Corporation.

“In the spirit of some of Nintendo’s most innovative properties, de Blob’s simple game mechanic will be fun and easy for core and casual gamers to learn and reveal unbelievably addicting levels of depth and complexity as they progress through the game. We look forward to unveiling de Blob at next week’s E3 press event,” said Kelly Flock, executive vice president of worldwide publishing, THQ.

Steve Dauterman, senior vice president of product development, added “With de Blob’s innovative control scheme, a swing of the Wii Remote or flick of the DS Stylus sends de Blob ricocheting and swinging through the city with splashes of color in his wake. Gamers will be able to liberate the lifeless city of Chroma and create a collaboration of energy, music and color that is a reflection of each player’s gaming style.”

A download of the original PC game is available here.