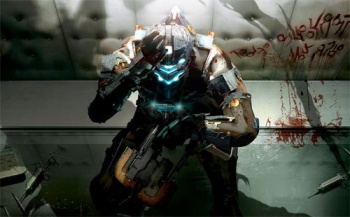 Dead Space 2 will include an unlockable “Hardcore mode” that throws players into the action at the highest difficulty level with only three saves for the entire game.

Fallout: New Vegas, you may recall, includes a special “Hardcore mode” that tweaks gameplay to make it more challenging for experienced gamers who want a taste of some good old-fashioned RPG toughness. But in spite of pre-release promises, it really doesn’t add much in the way of difficulty beyond the need to carry around a few doctor’s bags. But don’t expect such a gentle touch from the Hardcore mode in Dead Space 2. It’s vicious, and it will make you suffer.

“When we were thinking about what would be the ultimate difficulty mode, we were kicking around a lot of ideas,” Creative Director Wright Bagwell told MTV Multiplayer. “What we found was that it wasn’t really fun to continue to make the game harder by giving the enemies more hit points or giving you less bullets. It just crossed that line into frustration, and the combat doesn’t really feel good when you jack up the enemy hit points… it makes the game feel crappy.”

Instead, the team came up with Hardcore. Simply put, it’s the game’s highest difficulty level, with one diabolical twist: no checkpoints and only three saves for the whole thing.

“One of the things that’s really comforting in a game is the ability to save,” he explained. “When you get to some place and you’re like, ‘Ahhhhh, save station, everything is okay.’ We thought, if that’s the one thing that makes players feel all warm and fuzzy and safe, then let’s take it away from them. That’s where the idea came from.”

Naturally, anyone who finishes the game in Hardcore mode will get a special Achievement or Trophy, but there’s more than just that at stake. “There’s some really, really cool unlock if you manage to beat [Hard Core mode],” he added. What could it be? You’ll find out soon enough, if you’re hardcore enough – Dead Space 2 comes out on January 25 (today, that’s tomorrow) for the PC, PlayStation 3 and Xbox 360.