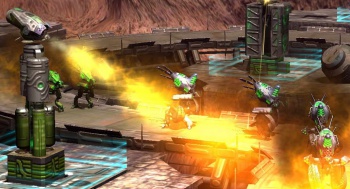 Microsoft has revealed the second game coming to its Games With Gold promotional offer: Defense Grid: The Awakening.

About two weeks ago we brought you news of the inaugural Games With Gold release. Fable III kicked off the promo, which offers a selection of free downloadable games to all Xbox Live Gold subscribers. If this scheme sounds familiar, that’s because it’s essentially the same thing Sony offers to those with PlayStation Plus subscriptions, though we won’t fault Microsoft for plagiarism too much as free games are always a welcome offering.

This week Microsoft rolls out the second Games With Gold title, Defense Grid: The Awakening. This title is a tower defense game initially released in 2009. Critics remain largely positive on the game, though it has aged somewhat poorly in the years since its debut. Those of you desperate to snag this free title need only log onto the Xbox Live Marketplace to download the game, though the standard Games With Gold caveats apply here.

Most crucially, you’ll need an Xbox Live Gold subscription to download Defense Grid: The Awakening. If you satisfy that requirement, you can grab the game at any time until it’s removed from the Games With Gold promotion. Once that happens, the game is more or less gone completely, but those who had previously downloaded the title from the Xbox Live Marketplace can still find and download the game from their Xbox Live account’s download history list.

Those of you who suddenly want to throw down money on an Xbox Live subscription can find all the necessary information on Microsoft’s official Xbox Live Gold site (though it should be noted that Amazon regularly sells Xbox Live Gold membership cards at two-thirds the price Microsoft will charge you for a year of service).

Expect the next Games With Gold title to appear on July 16. We think. Honestly, Microsoft isn’t being very forthcoming on this promotional effort, so we’re as in the dark as you are on what might be coming next.