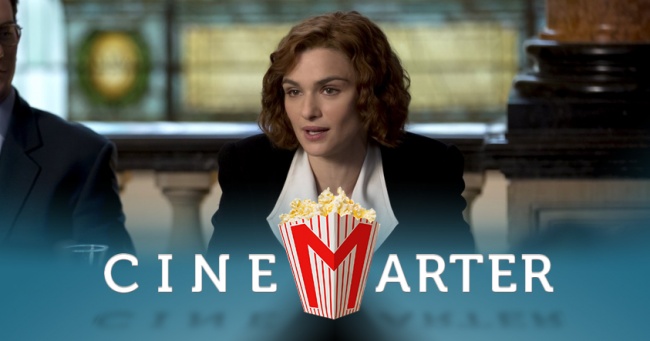 The prevailing thought I had coming away from Denial is this: “How did I not know that this happened?” Directed by Mick Jackson – whose last theatrically released movie was, I kid you not, 1997’s Volcano – and based on a true story, the film follows a courtroom battle between a Holocaust denier and a historian and teacher who very much believes – like almost everyone – that the Holocaust really did, in fact, happen. This went to trial in England, in front of just a single judge, and took weeks of time and millions of pounds. You’ll be unsurprised by the result, but the process is interesting, it delivers an effective amount of catharsis, and it’s very well-acted.

The defendant in the case is Deborah Lipstadt (Rachel Weisz), who is accused of libel by David Irving (Timothy Spall), after she said some unkind things about him in one of her books. He sued her in England because the burden of proof is on the accused, not the accuser, in these cases. Lipstadt, therefore, had to prove that what she said – that Irving was a liar, essentially – was true, and in the process effectively prove that the Holocaust happened. 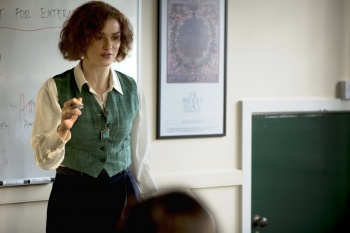 That sounds easy, at first, until you try to find actual documents and evidence that prove it. That’s the thing, and one of the most interesting things that you come away from with Denial. Knowing something is true and proving it isn’t always the easiest thing to do. “We know what it is; it’s how we prove what it is,” a character says, referring to rooms at Auschwitz that were used as gas chambers. Irving was basically a troll, cherry picking facts or flat-out inventing them in order to get across points that wouldn’t even hold up in an off-the-cuff Devil’s Advocate argument. But he speaks eloquently and was well-researched – even if not always accurate – and because the burden of proof wasn’t on him, the case proves difficult.

Most of Denial is a pretty standard courtroom drama. The protagonists spend a long time building up their case, it’s then presented over the course of several weeks, and after the judge reaches his decision – it was requested that the resolution would come from a single judge, as opposed to a jury – we see the aftermath and then roll the credits. There isn’t a whole lot that’s new here, except that the true story elevates it past the point of mediocrity and tedium – assuming you become interested in the story.

Denial feels almost like a faux, wannabe documentary – in that it’s primarily interested in showcasing facts about the Holocaust, not about any of the individuals involved in its story.

That’s where the majority of Denial‘s impact comes from: if you aren’t aware of the real world story, you’ll probably find it interesting enough to see all the way through. Which arguments do they have to debunk? How can Irving argue that the Holocaust didn’t, in fact, happen – and that even if it did, Hitler had nothing to do with it, and it was greatly exaggerated? It’s fascinating on its own right, and as a reenactment of what probably happened – it’s based on Lipstadt’s book on the event – it works.

If you are aware of what happened, then beyond getting the inherent glee of pointing out where the filmmakers took liberties with the story, you’re not going to get much out of Denial. It’s a courtroom drama film, and there aren’t interesting characters on display. As Lipstadt’s lead lawyer, Richard Rampton (Tom Wilkinson) informs her: “This case is happening to you, but it isn’t about you.” It’s the same with the movie. As such, there aren’t deep or particularly interesting characters to whom we can attach ourselves. It’s all about the case.

Rachel Weisz is fiery and passionate as Deborah Lipstadt, turning in another strong performance in a career of them. Tom Wilkinson is likable as her lawyer, but not a whole lot more. Timothy Spall walks away with the film as David Irving, a despicable character, to be sure. He’s immensely compelling – more so here than perhaps in any of his previous roles, including Mr. Turner – and commands the screen with his despicable and monstrous ferocity.

Denial feels almost like a faux, wannabe documentary – not a mockumentary – in that it’s primarily interested in showcasing facts about the Holocaust, not about any of the individuals involved in its story. That’s fine, assuming the story is something that interests you. If it does, Denial is effective enough. If not, then it’s not worth your time. It doesn’t contain much feeling or nuance. It’s here to present the true story, which it does well.

Bottom Line: A standard courtroom drama elevated by its true-to-life story, Denial is informative but not particularly engaging.

Recommendation: If you think it’ll interest you, go see Denial. If not, it doesn’t have much that’ll change your mind.