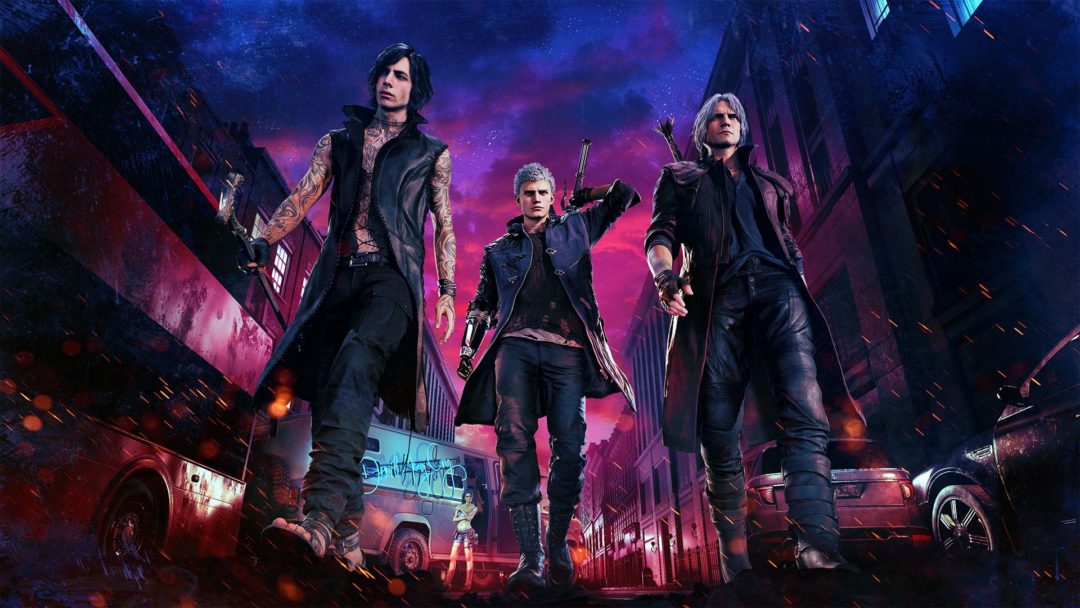 If you’ve played a Resident Evil or Monster Hunter game in the past 15 years, you’ve heard Kota Suzuki’s music. Specializing in a mixture of orchestral ambiance and hard rock, Suzuki’s music has embodied a distinctly Capcom flair since he first joined the company back in the PlayStation 2 era. While he’s spent most of his time at the company working on the Resident Evil series, his most recent work is a sort of homecoming.

Devil May Cry 5 is not just the first Capcom-developed entry in the series since 2008, but the first to feature Suzuki’s music since then as well. Devil May Cry 4 was his first major soundtrack handled primarily on his own. Laced Records and Capcom will be issuing his work from the game in a series of releases, including a massive four LP vinyl boxset, a five CD boxset, and a slick two LP standard edition feature select tracks.

How did he get himself back in that over the top, righteous, just slightly cheesy (in the best way) rock sound? Suzuki and I discussed coming back to Devil May Cry, making music “with a touch of death,” Resident Evil, and his work on the only samurai game to star Jean Reno.

Devil May Cry 5 was something of a homecoming for you as a composer as Devil May Cry 4 was your second big project with Capcom. How did you get yourself back in the Devil May Cry mindset for this soundtrack?

It had been 10 years since composing for DMC4, so first I replayed DMC4 to remember how it feels to play that game. I also got a chance to compose a song for the “Devil May Cry HR/HM Arrange” album in 2015, and received various advice from the Devil May Cry 4: Special Edition and Devil May Cry 5 audio lead Kakunoshin Atsumi on “Devil May Cry-ness.”

What is the essence of Devil May Cry, the mood that you’re trying to capture in the songs you make for this series?

Music that rocks — or in other words, music that doesn’t fit too much with theory, that sounds cool, and exudes originality. Also: “music with a touch of death.” In other words, even if the song is upbeat, you can feel a sense of fear or cold — dark elements. I think these are the two main points.

What’s different about working on the Devil May Cry series compared to the Resident Evil series that’s been your focus for most of the last decade?

Well, this is specifically speaking for Resident Evil games that I’ve worked on, but I think the most important thing for those games is conveying that sense of horror, so the music and sound effects need to work together to serve that purpose. For instance, I’ve created music that acts more as environmental sounds, and at times I’ve left places in the music for emptiness so that the sound effects are easier to hear. I made the dynamic range relatively wide so that the music can make you feel tense.

A few years back I was speaking with Akira Yamaoka, a composer whose work, like yours, tends to be suited for a blend of horror and action. His philosophy for writing game soundtracks struck me as unusual. He said, “I don’t think of each piece as a single piece of music or as a song. I think of them first as collections of sounds, something that mixes with the rest of what you see on screen.”

How do you personally approach soundtracks for games like Devil May Cry 5? Do you want tracks to stand alone as songs that suit the game or as pure atmosphere pieces that suit the action?

Back when I was working on the Resident Evil series I more or less felt the same as Yamaoka-san. For DMC5 I wanted to fulfill both sides. In other words, I wanted to create music that would match well with the scene and what was showing on-screen while playing the game, while also making it something that would be cool to listen to as a stand-alone song.

The Devil May Cry series has lots of fans that particularly like the music. Those fans will get excited and talk about things like, “Dante’s battle theme is awesome, isn’t it?” or “I love the song that plays during that one boss fight!” So one thing I wanted to be absolutely sure of was not to put limitations on the songs in the interest of matching up with the scene or interactivity that would ultimately lessen that enjoyment of the song on its own. On the sound team, we had numerous discussions going back and forth about how we can be sure that we achieve both of those things. It was a lot of work, but I think it worked out well.

There were already other composers assigned to RE7 and RE2. I think they did an amazing job and have nothing but respect for their work! Right when my work was coming to an end on Umbrella Corps, my boss came to me and asked if I’d like to work on DMC5 next, so of course I jumped at the chance.

I’ve read that your personal favorite piece on the Resident Evil Revelations 2 soundtrack is  “Revelations —Cliffhunger Ver.—.“ That piece has a great mood, everything I want in a Resident Evil track. It’s dramatic and sweeping, full of weird piano. Why is this your favorite track from that game? What’s your favorite track from the Devil May Cry 5 soundtrack?

As I mentioned previously, for the RE series, conveying the horror is of the utmost importance, so we’ve never really had a theme song that has persisted between titles. But when working on the first Resident Evil Revelations, I proposed that we try to compose the music as if it was a TV drama, and created a theme song. In TV dramas you have this specific, catchy song that would play during specific scenes. That way of thinking produced “Revelations.”

“Revelations —Cliffhunger Ver.—“ is an arrangement of that song for Revelations 2. In the first Revelations, it was more of a classical piano concerto, but for the arrangement for 2 we mixed in the sounds from an original instrument made for us by Nima Fakhrara in order to create a unique arrangement oozing with personality.

As a game composer, I felt this wonderful sense of elation from being able to introduce a new theme song to the RE series and this is why I have a special place in my heart for this song. If we ever made a new entry in the Revelations series I would love to either do yet another arrangement myself, or have someone else do a new arrangement.

There are a lot of tracks in DMC5 that I like, but if I had to pare it down to just two … It would be “Undeniable Fate” and “Legacy (DMC5 Main Theme).” “Undeniable Fate” was a boss battle theme where I composed a mock-up, then John R. Graham did a wonderful arrangement that we used in game. And actually, the melody from “Legacy” was born from this song. After composing “Undeniable Fate,” we did a vocal arrangement that became “Legacy.” I was very emotionally invested in these two songs, so that’s why they’re my favorites.

You’re credited as writing one of the arrangements on the Mega Man 11 soundtrack. How did you get involved in that project?

The Mega Man 11 team wanted to record bonus tracks arranged by different composers and came to the Capcom composer team with that request. I got a chance to do just one arrangement – Bounce Man. It’s got a really beautiful melody, so I had a lot of fun with that arrangement!

What Capcom series have you not gotten to work on over the last twelve years that you’d like to take a crack at after working on Resident Evil and Devil May Cry for so long?

I’d love to work on anything I can, so there’s nothing in particular that I could choose. I suppose the title is important, but the people that I get to work with are also really important to me. I always want to do my absolute best for teams that are kind enough to let me know that my music and expression are important to them.

I’ve had trouble tracking down specifically what tracks you worked on for the Onimusha 3 soundtrack. That is one of the most underrated games to ever come out of Capcom. What do you remember about working on that game when you first joined the company?

Wow, that takes me back! (laughs) I was a fresh, new hire at the time so it was a challenging time. Back then I learned a lot about composing from two other composers — Akari Kaida and Hideki Okugawa. I composed 20 to 30 songs including “Heihachi’s” theme and the music for the Eiffel Tower. Please check out the soundtrack, which should also have liner notes!

What is the perfect cocktail to pair with Devil May Cry 5?

Cocktail? (laughs) I dunno … I guess since we’re talking about demons, maybe a Red Eye? I’m more of a gin & tonic type myself. I’m sorry I couldn’t come up with a funnier answer! (laughs)