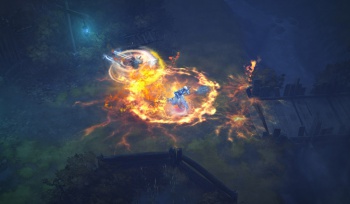 Blizzard offers a free-for-all arena “without the potential for griefing” from Diablo II.

The Diablo III faithful won’t be seeing a Team Deathmatch mode anytime soon, as Blizzard reckons it isn’t up to the “high-quality Blizzard experience” that fans are expecting. On the other hand, the company did mention that a dueling mode is on its way in an upcoming patch, which has been detailed in an official preview.

Wyatt Cheng, Technical Designer for Diablo III, penned the official blog post on the new game mode, which “allows players to test their mettle against fellow Nephalem”. The new dueling option will support up to four players in free-for-all combat.

To start a duel, the player needs to speak with an NPC at the inn in New Tristram, which teleports the player’s party to the Scorched Chapel. This newly created dueling arena features four main areas: a church, a graveyard, a river, and a lake.

“Our intent is to provide players a safe, opt-in location where they can fight one another for bragging rights (or maybe science) without the potential for griefing as it existed in Diablo II,” Cheng explains.

Those looking for something beyond fighting to the death will be disappointed to learn that there will be no scorekeeping and no objectives in this mode. It also looks like the only thing at stake is pride: death will not be permanent in the Scorched Chapel, even for Hardcore characters. Durability damage will also be nixed while a character remains in the dueling area.

“We wanted dueling to be as simple and straightforward as possible, so we created a minimalist system,” Cheng says. “We know that even without rewards and objectives, some players just want to beat each other up.

“Some matchups may be one-sided, and we don’t expect that battles will be necessarily balanced. But that’s okay, because dueling in Diablo III is more about kicking ass and taking names in a no-holds-barred sort of way, and this design certainly allows you to accomplish that.”

In addition, the new patch will include a number of updates to the Wizard and Monk classes. There will also be a new set of Rare crafting recipes that will generate account-bound items; changes to the “Monster Power” system; and some modifications to “Reflects Damage”, “Molten”, and “Plagued” affixes.