This review was originally posted on GameFront.com. 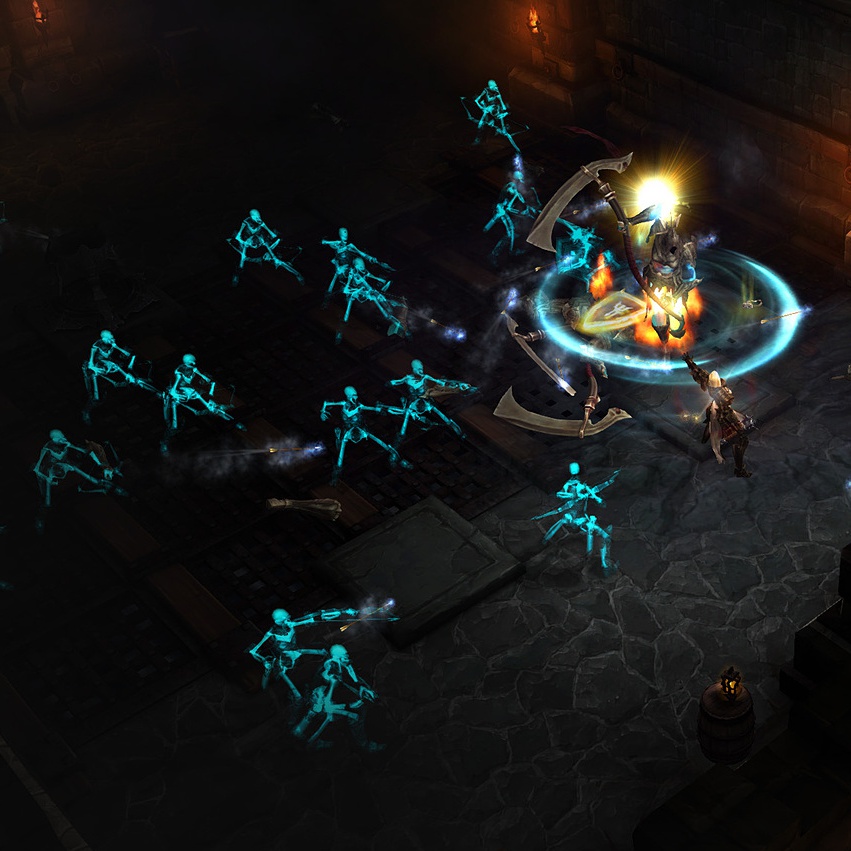 As we’ve all heard in the trailers, “No one can escape death.” Uttered by Malthael, the expansion’s titular big bad guy, it becomes almost a mantra by the time you’ve finished the Reaper of Souls campaign. I won’t spoil the story here, but suffice to say that you’ll have no doubts about how Malthael feels about death by the time you’re through. Much like all the evil lords of hell in the core game, he can’t help but pop up every now and then to remind you that he’s evil, and you’re doomed. It gets rather tiresome.

In fact, that’s the case for all of the Reaper of Souls campaign. Just like in Diablo III, the story isn’t well-delivered. Instead, it’s told mostly in cutscenes that vary little from character to character, and ignored in most of the actual gameplay, unless you count the flashing yellow arrow on the minimap. While Blizzard’s cinematics are as wonderful as ever, their quality can’t distract from the generic nature of the story, or from the painfully obvious twist at the end.

But let’s face it — no one is playing Diablo for its grand story and overarching plots. They’re playing it for one thing: the epic loot.

Any discussion of loot in Reaper of Souls should really begin with the patch that preceded its launch, and the removal of the much-maligned Real Money Auction House (RMAH). In its place came a new system, dubbed, “Loot 2.0.” Basically, this new system adjusted the drop rate of items so that items drop less frequently, but those that do drop are of higher quality. They are also more likely to have higher bonuses and more useful properties attached to them.

But the patch was about more than just loot. It also included a major reworking of the Paragon level system, removing the previous cap and making Paragon levels account-wide. The game’s difficulty system was revamped to adjust all monsters to the player’s level, and then difficulty settings ramp up the challenge from that point.

Additionally, this patch also introduced events centered around cursed shrines and chests. When you encounter one of these in the world, it kicks off an event that requires you to survive numerous waves of enemies. If you do so, you’re rewarded with gold and experience, as well as the ability to open the chest or use the shrine normally. Beat the event before the timer expires, and you’ll get a bonus chest as well.

What all these changes boil down to is a revamping of the loot system in the wake of the removal of the RMAH. Weapons are more likely to line up with your character’s needs, and your chances of getting the occasional amazing item are much higher now. That’s a must since gearing up through the auction house is no longer possible.

Another addition that makes gear much easier to deal with is the Mystic. This NPC pops up during the campaign, and eventually sets up shop in town. While the blacksmith and the jeweler are still there for you to craft with, the Mystic allows you to remove and reassign one stat on a rare or higher quality piece of gear.

This isn’t a process that you’ll use on every piece of gear (as the process can become quite expensive in terms of materials and gold), but it’s nice to be able to swap out the one bonus you don’t need for something you really do. The reassigned stat is always random, allowing you to pick between three random choices. While this was probably necessary, it can be downright frustrating at times, especially if you’re trying to get a specific stat for your class. 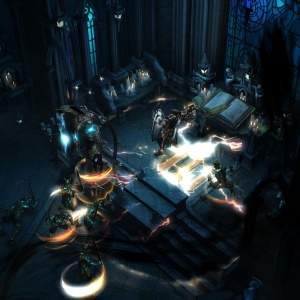 One of Diablo III‘s biggest problems was a lack of replay value. Sure, there were folks who played through the game hundreds of time to garner the best loot, but there were just as many who finished the campaign and walked away. In an effort to provide repeatable content to keep the attention of those players, Blizzard added Adventure Mode.

On paper, Adventure Mode is great. You head back to places you visited in the campaign and complete short quests such as killing a specific named enemy or cleaning out a dungeon. Sometimes you need to run the whole area, and others you can complete quickly and warp back to town. Finishing these quests rewards you with items, gold, and experience. You’ll also collect two new types of “currency:” Rift Keystone fragments and Blood Shards.

Rift Keystone fragments allow you to open Nephalem Rifts once you’ve collected enough of them. Each rift contains a randomly generated dungeon layout, plenty of enemies to kill, and even bosses. Blood Shards can be traded to a new town vendor for an unidentified item. Basically, you’re gambling that you’ll receive something that’s worth the time and effort you put into farming up those shards.

Unfortunately, Adventure Mode quickly begins to feel stale. Once you realize that you’re simply playing the same similar dungeons over and over for slightly better loot, it loses its charm. The random generation doesn’t change enough to make it feel new, and that really hurts the experience.

The other big addition packed into Reaper of Souls is a new class — the Crusader. A melee fighter adept with flails and shields, the Crusader uses his Wrath to lay waste to his enemies. In practice, that means you use abilities like charging, area attacks with your flail that set enemies alight, and bursts of holy light that blind baddies, just to name a few. The best comparison for the Crusader is the Paladin from Diablo II, and even some of the Crusader’s abilities, like Shield Charge, seem cribbed from there.

These attacks, and the Crusader’s holy theme, serve to set the class apart from the game’s other strength-based melee class, the Barbarian. Still, if you’ve leveled a Barbarian and saved any good equipment, you can definitely hand some of it down.

There’s a reason that Diablo III‘s launch issues only got a token mention up this point. Simply put, the Reaper of Souls launch was smooth as silk. Aside from a few instances of brief lag (which could be attributed to anything), my time with Reaper has been nothing like the pain that was associated with Error 37 and other launch problems.

Some have attributed this to Blizzard learning their lesson from the initial launch, and some to the fact that many of the players that caused those server issues having given up on the game. Either way, that I didn’t have to cross my fingers every time I clicked on “Start Game” was a huge step forward. Of course, I was still stopped from playing during my review due to my ISP doing maintenance in my neighborhood, reiterating the need for Blizzard to add an offline mode to the game.

Bottom Line: Reaper of Souls doesn’t veer too far from the road Diablo III has traveled. While the changes that came in patch 2.0.1 are great for the game, the expansion really feels like more of the same than any significant step forward.

Recommendation: If you liked Diablo III, you should probably pick up Reaper of Souls. Isn’t that exactly how an expansion should work?

This review was originally posted on GameFront.com.

8 Reasons The Teenage Mutant Ninja Turtles Are An Anomaly