There are many vivid and striking aspects to ZA/UM’s consciousness-based cop drama, Disco Elysium — the way it flips the typical RPG formula on its head by favoring internal development over external, how it plays with politics, and its tonal misdirection, jumping from absurd humor one moment to melancholy the next.

But what struck me most playing it for the first time were the characters — the people of Revachol, quirky and life-like — the internal portraits, and how Disco Elysium characterizes consciousness. Each aspect of the self becomes a figure in its own right, commenting on and influencing the action. Most of all, they band together to create a discourse, a unified but often combative dialogue where they try to decide how to proceed — which is frequently absurd and hilarious. These dual states couldn’t help but remind me of the idea of chorus in theater.

In Ancient Greece, the chorus was a group of performers who would comment upon the action of the main play, whether through dance, singing, or recitation. But their most important aspect was that they embodied the collective: a group of non-individualized characters representing “the people” of a particular story.

They would perform in unison, speak in unison, act in unison. But the unity of the Greek chorus reflects consensus — an idea that Disco Elysium’s battling political states and conflicted self show to be a fallacy at best. Modern interpretations of the chorus focus more on “the people” as the collection of individuals that compose that group. In Disco Elysium, your consciousness is that chorus. 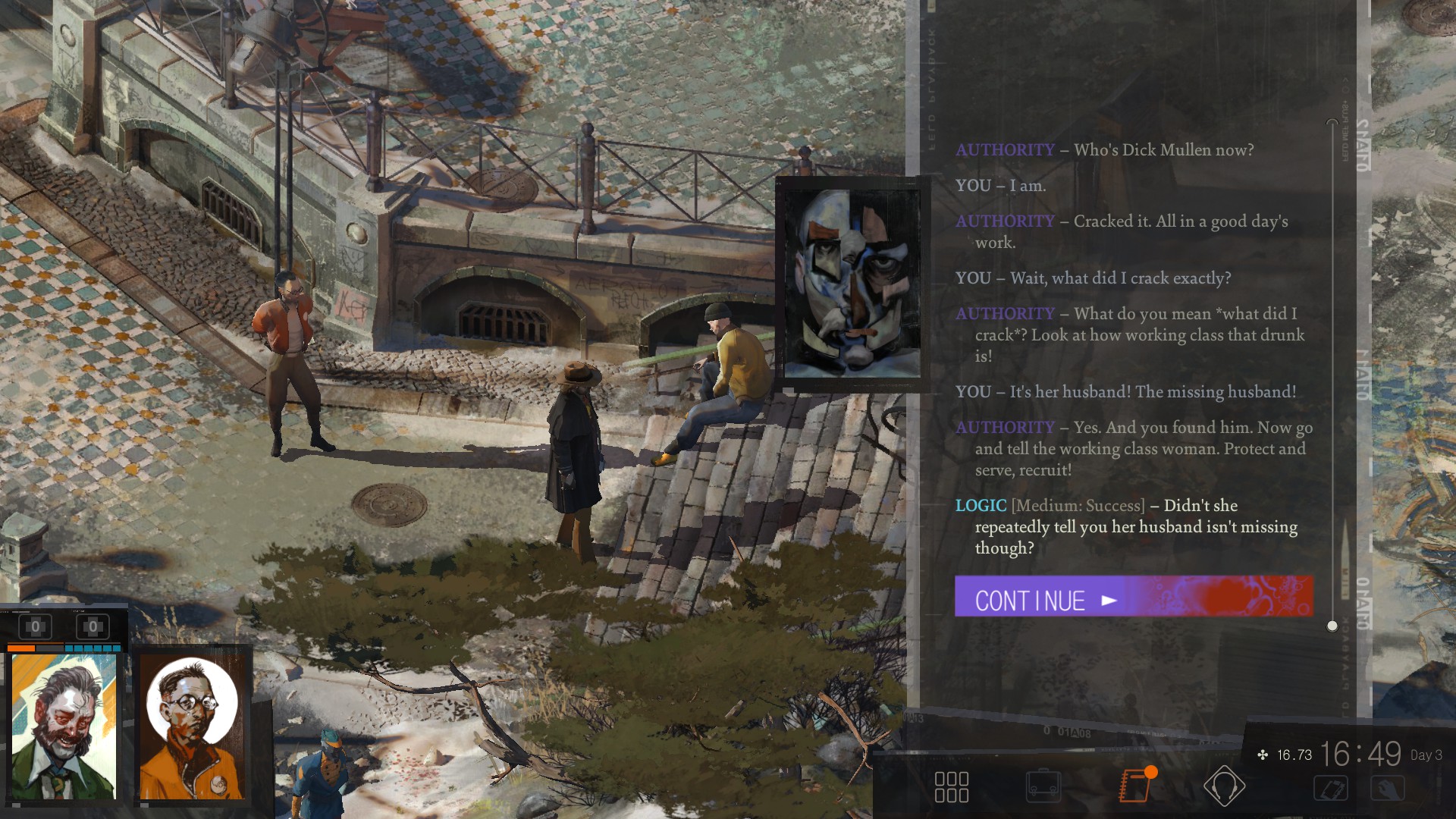 The aspects of the self that Disco Elysium characterizes are a unified collective of voices, but also individuals in their own right. In terms of function, they also fulfill a very similar purpose to a chorus — they are a group of characters that only the audience (the player) can see, who comment upon the action, influencing the way it is perceived. Theater’s chorus was the filter through which the play was broken down for audiences, speaking secrets that characters themselves couldn’t express. In Disco, these voices provide similar insight into the world and its characters.

While discussing modern interpretations of the Greek chorus, Dr. Lucy Jackson says for a National Theatre video, “One of the things they do all the time is they talk about different places in different times, so the chorus in a way acts as a window into other worlds.”

Throughout Disco Elysium, players are granted similar snapshots: Encyclopedia describes far away countries or historical events, Inland Empire imagines a world where everything has a life of its own, and Shivers draws players into both the past and the future, describing what could be, but also what remains.

A key component of chorus is also stereotype, and Dr. Jackson reflects upon how they allow audiences to engage and understand a group of characters whose identities are otherwise challenging. It’s something we can see in Disco Elysium as well, each individual voice fulfilling a separate stereotype based upon its name. Drama is basically a thespian, speaking in ye olde Shakespearean tongue, Encyclopedia is a nerd and know-it-all, Logic is prim and proper, and Electrochemistry is the cool kid, a pleasure seeker. T

hese stereotypes allow us to engage with the chorus, but they also heighten interactions and arguments to the point of absolute hilarity. A good deal of Disco Elysium’s humor is derived from the absurdity of consciousness as a state — a collective of conflicting voices, united for better or worse within the self, but who in spite of differences are trying to make positive decisions for survival and progress. It’s kind of a microcosm for human society at large, which fits pretty well within Disco Elysium’s discussion of disparate ideologies and political movements.

The Greek chorus was often distinguished for the masks they wore, removing individual identity to become a cohesive a group. I like how this idea manifests itself in Disco. Every member of the chorus has the same mask, the self as a starting point, but each distorts that image to reflect its individuality — the cracked, compartmentalized face of Logic, an Encyclopedia opening into a brain, the exploded mind of Inland Empire.

All of these represent the unique yet paradoxical chorus that is consciousness: a set of conflicting voices somehow unified into one. Through the idea of chorus we can recognize Disco Elysium’s brilliance — a worthy depiction of consciousness as the absurd, chaotic, yet perfected mess that it truly is.