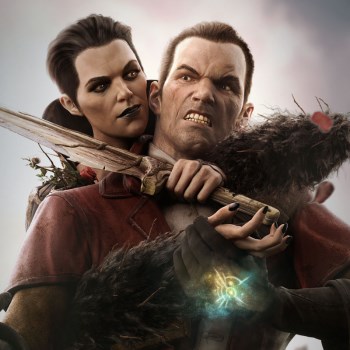 Dishonored: The Brigmore Witches will bring the twisted tale of the supernatural assassin Daud to a close once and for all.

Bethesda Softworks has confirmed that the next, and last, Dishonored DLC will be The Brigmore Witches, which will conclude the story that began in The Knife of Dunwall. Playing as Daud, you will set out to disrupt a powerful rite being performed by the head of the Brigmore witch coven that will spell your doom if completed. You will be forced to deal with rival gangs, the Dead Eels and the Hatters, as you navigate through never-before-seen areas of Dunwall on the way to her stronghold – and to your fate.

Bethesda has released a pair of Brigmore Witches screens that go rather nicely with the Brigmore Witches concept art we saw earlier this morning, and while it’s clearly just “more Dunwall,” that’s not a bad thing at all, especially since this will be the final Dishonored DLC release.

Dishonored: The Brigmore Witches launches on August 13 for the Xbox 360, PlayStation 3 and PC, and will cost $9.99 or 800 Microsoft points. To find out more, hit up Dishonored.com.

Why Can’t Comedy Games be Funny to Play?

PS4 Controller Aims to Be “Ideal” For FPS Games