Editor’s Note: This article has been updated to reflect the facts of the story, instead of the opinions of the author. The Escapist apologizes for the unnecessary and undisclosed opinions included in the original story. 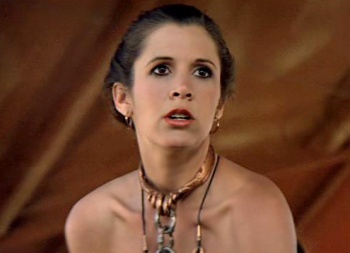 The iconic, audacious, and probably uncomfortable golden bikini worn by Carrie Fisher in Return of the Jedi may soon be a rarity on toy shelves.

Many bothans may have died to bring us this information, but for now consider it just a rumor: Disney plans on banning Leia’s slave bikini from all future Star Wars merchandising plans.

In Return of the Jedi, Leia is captured and imprisoned by Jabba the Hutt while she was attempting to infiltrate his compound on Tatooine. Once in his clutches, the princess and rebel leader is humiliated by being forced to wear a gold bikini while she serves the slug crime lord – until she kills the beast in perhaps the most brutal death scene in all of Star Wars.[1]

Carrie Fisher, Leia Organa herself, once described the outfit as “what supermodels will eventually wear in the seventh ring of hell.“

Artist for Marvel, J. Scott Campbell, said on Facebook that sexy depictions of Leia in comics are discouraged. “Disney is already well on its way to wiping out the “slave” outfit from any future products period. You will NOT see any future merchandising featuring the slave outfit ever again. Trust me,” he went on.

Disney and the Star Wars crew have been trying to make the universe a little bit more inclusive over the years. The novels (though many of them are no longer canon) are largely kinder to their female characters; portrayals of Leia in modern board games display her as a bad-ass rebel leader, for example.

For The Force Awakens star, Daisy Ridley, Fisher had this to say in Interview magazine: “Don’t be a slave like I was.”

What do you think? Should Slave Leia stick around as an iconic memory, or is Disney on the right track?

[1] Rumor has it that one of Fisher’s high heels punctured the Jabba puppet in the chain-choking scene, injuring an animator working inside him.

The Crow Remake Back On, Begins Shooting in March

Fallout 4‘s Companion App is Out Now on Android