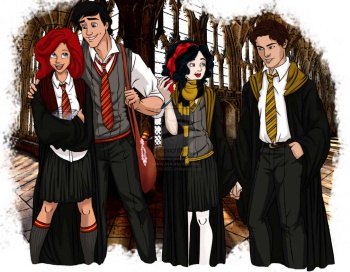 Ariel and Merida are totally Gryffindors.

The fan art trend of “Disney Princesses as X” shows no sign of slowing down. We’ve seen them as warriors, Final Fantasy job classes, and zombie apocalypse survivors; now Deviantart artist Eira1893 has reimagined the lovely ladies and white knights of Disney fandom as Hogwarts students.

In the eight pieces, the Disney characters are all proudly displaying their house colors, and Eria1893’s sorting is dead-on. Ariel and Merida would make great Gryffindors, and Frozen‘s Anna and Sven are right at home in a Hufflepuff common room. And it’s nice to see that Aurora and her prince can keep the flame burning even while belonging to different houses. Prince Naveen of The Princess and the Frog fame has found himself in Slytherin, where one imagines he’d be joined by plenty of Disney villains.

The artwork was first posted back in April, but with J.K. Rowling continuing to tell Harry Potter stories on Pottermore, it seems like a fitting time for this mash-up to make the internet rounds. What are your thoughts on the Disney/Hogwarts sorting? Be sure to let us know in the comments.