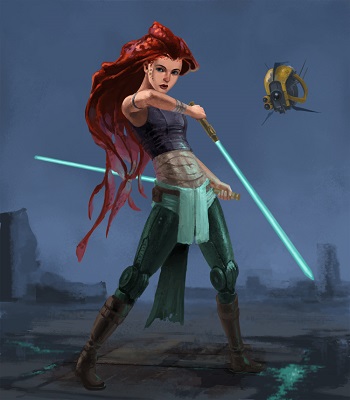 When Disney purchased Lucasfilm and Star Wars, one of the first thing that many people did was joke about the fact Princess Leia might now count as a Disney princess. That being the case, what if the reverse were to occur? Never one to pass up the opportunity to transform a Disney Princess from one thing into another, the internet has provided us with an answer.

Or, more specifically, artist Phil Berry has. A concept artist, Berry recently produced a series of images focused on re-imagining four of Disney’s princesses -Jasmine, Ariel, Rapunzel and Belle- as Force-powered saber-wielding Jedi. Speaking to The Escapist, Berry revealed that he picked the princesses based “on what they could offer” to the Star Wars universe. “I’ve never seen a Jedi use only the Force to wield a weapon, so I thought Rapuzel’s hair would be a great opportunity to play with that idea,” he said. The biggest driver behind his choices however, were actually the princesses’ sidekicks. “The biggest factor was if I could have fun transforming the princess’s companions into a Star Wars looking alien. I wanted to avoid making the Beast a Wookiee, or making Rajah a Nexu, so I could make my own.” Berry would go on to share that he’d like to continue the series with illustrations based on Ursula, Snow White and Merida.

Speaking personally, I’d love to see Berry continue with illustrations based on all of Disney’s princesses. Mulan would be great fodder for a Jedi conversion, as would Aurora and, of course, Anna and Elsa. Here’s hoping Berry can find the time to work his way through them all. In the mean time, check out the ones he’s finished (and his take on a young Yoda too!).
Source: DeviantArt

8 of The Coolest Diablo 3 Legendaries