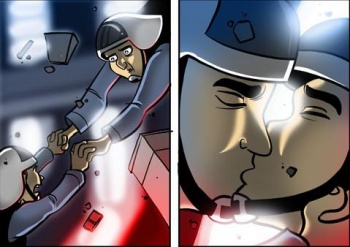 Controversy flared on Bioware’s Star Wars: The Old Republic forums after the words “homosexual,” “gay,” and “lesbian” were auto-censored, and a moderator insisted that those terms did “not exist in Star Wars.”

The story as we understand it, thus far: Players on the official Star Wars: The Old Republic community forums began to discuss how Bioware’s upcoming Star Wars MMO – and its playerbase – would handle same-sex relationships. As more and more threads started popping up about the issue, the discussion grew more heated. Eventually, forum moderators began locking the discussions.

Naturally, telling people that they can’t talk about something only encourages them to talk about it more. Before long, the forums were auto-censoring the terms “homosexual,” “gay,” and “lesbian,” as they would for regular profanity. Community manager Sean Dahlberg attempted to decisively quash the controversy by posting in one of the threads in question protesting Bioware’s apparent discrimination against the GLBT community:

As I have stated before, these are terms that do not exist in Star Wars.

The story, of course, doesn’t end there. After a few hours’ worth of “scheduled maintenance” downtime, the forums reopened – with the three banned words no longer censored. The thread in question has since been reopened, and Dahlberg’s post removed (Edit: Whoops, it wasn’t removed – it’s just back on Page 4 now. Thanks, Nyanya!)

So, controversy over, right? The whole thing seems kind of silly of Bioware to do – after all, recent Bioware games have specifically enabled characters to pursue same-sex romances, like Jade Empire or Mass Effect. Hell, even the first Knights of the Old Republic had Juhani – who, if the game is to be believed, had a female lover. So for Bioware to suddenly do a 180 on the matter seems rather odd.

Of course, one might also argue that Dahlberg’s comment was more forward-thinking in nature, and that he wasn’t saying that people with same-sex relationships didn’t exist in the world of Star Wars… but that a more advanced society wouldn’t see any difference between a homosexual relationship and a heterosexual one. Hence, the terms “gay” and “lesbian” wouldn’t exist in Star Wars.*

Either way, Bioware handled the entire thing rather poorly, and I wouldn’t be surprised to see the issue rear its head again down the line. This isn’t the sort of matter that just dies down quietly, after all.

*So yes, fangirls, you can still write your Obi-Wan/Anakin slash fanfiction. You just can’t refer to them as “gay” in it anymore.