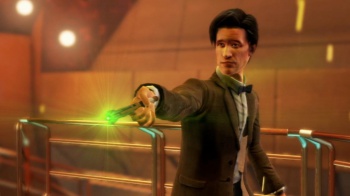 Doctor Who and the Eternity Clock (PSN) knows that fans of the show upon which it’s based want to see the Doctor fight seemingly unstoppable foes, rattle off technobabble and escape disaster using nothing more than his wits, his sonic screwdriver, and an unflappable sense of right and wrong. You will get to do those things in Eternity Clock, but you will also have to endure some of the most tedious and uninspired platforming put forth since lackluster developers started churning out cut-rate titles for the original PlayStation. Do not be fooled by the game’s attention to Whovian detail: Eternity Clock is a disaster.

The story is pure Doctor Who romp, sending the Doctor and River Song through time as they track down bits of the Eternity Clock, which is creating a hole in the universe. The TARDIS is currently plugging the hole, but should it move even slightly, everything everywhere and everywhen will be destroyed! (There are no such things as small stakes in Doctor Who.) The duo will encounter all sorts of villainous mainstays such as Cybermen, Silurians (sorry, homo reptilius), and the Silence, all of whom are using the Eternity Clock for nefarious means. Cramming so many enemies into a single game feels a bit forced, but they’re all given the correct context and motivations for their actions, which shows a refreshing respect for the source material.

The actual gameplay, however, retains none of the show’s energy or spirit, instead offering leaden 2D platforming. You’ll climb ladders, shimmy across pipes, raise platforms and, yes, push crates as you solve Eternity Clock‘s dull environmental puzzles. Because when I think of a true Doctor Who adventure, I immediately think about shoving crates around a barn to reach a poorly positioned ladder. The locations may change – a gleaming office building one minute, the London sewers the next – but your core cadre of challenges never does. Climb, jump, push, yawn. Every so often, you’ll have to sneak past some careless sentry who apparently once suffered a grievous neck injury that prevents him from looking up or down. The stealth sections are just difficult enough to be annoying, but not tricky enough to require your full gaming brain – if you get caught, it’s probably because you grew impatient or Eternity Clock‘s imprecise controls left you jumping down to the next floor instead of grabbing the ladder.

The gameplay is tedious, but could’ve been moderately palatable were it not for the traditional-style puzzles you’ll also encounter occasionally, such as connecting circuits by twisting panels into the proper configuration, or assembling a jigsaw by aligning concentric rings. Guiding an energy bead into a slot is as good an approximation of overloading a Cyberman command module as anything else, I suppose, but there simply aren’t enough different kinds of these puzzles to keep them interesting, and any vague sense of fun they might’ve provided vanishes when the game ups the challenge by pitting you against a timer. The puzzles grow more difficult as the game progresses, forcing you to solve them faster, or more often, or while jumping up and down on one foot. Ok, that last part isn’t actually true, but it might make your time with Eternity Clock somewhat more interesting, so feel free to give it a shot.

It truly is a shame that the actual game part of Eternity Clock is such drek because Matt Smith lights up the screen with his voice work. His contribution to the game is absolutely perfect as he channels the Doctor with all of his trademark quirks and cadences. Alex Kingston can’t quite bring River’s effortless elan to the game, but she proves a capable foil to Smith’s aural antics. The enemies aren’t given as much opportunity to present themselves as characters with motivations beyond “do bad things to Earth,” but that’s pretty on point for Doctor Who baddies, so they, too feel pulled right from the show. Even the sonic screwdriver feels right as you fiddle with it to unlock doors, defeat enemies , move objects and interact with just about everything (except wood, of course).

If you’ve heard your friends gushing about Doctor Who and thought that Eternity Clock might be a way to gain entry into the show’s lore, forget it. The game makes absolutely no effort to explain anything to anyone not already intimately familiar with the show. While fans will know immediately why they should be worried about the wall with all the hashmarks on it, non-fans will just figure it’s rather boring graffiti. Why is River kissing guards when she’s trying to escape the prison? What’s the deal with the psychic paper? Why doesn’t the Doctor just get a gun, already?Eternity Clock doesn’t take the smallest swipe at explaining any of that to new players, leaving them to just muddle through as best they can. You don’t have to know about River’s Vortex Manipulator or the Cloister Bell in order to succeed in the game, but without that context, there’s literally nothing left to enjoy.

Bottom Line: Matt Smith does his best to salvage Doctor Who and the Eternity Clock and nearly pulls it off, but the gameplay is uninspired, dull, and painfully unfun.

Recommendation: Whether you’re a fan of the show or not, you won’t find anything here to enjoy. Go rewatch “The Curse of the Black Spot” instead. Yeah, it’s that bad.

Stay Awake Among the Sleep