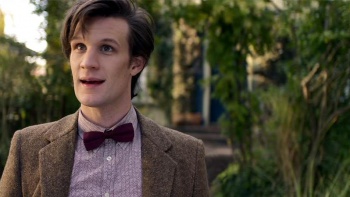 The Doctor joins the Khaleesi in the Terminator reboot.

Matt Smith will join the cast of Terminator: Genesis, Paramount Pictures and Skydance Productions announced today. Smith will play a new character, albeit one with a strong connection to John Connor.

Smith joins Arnold Schwarzenegger, Jai Courtney, J.K. Simmons, Dayo Okeniyi, Byung Hun Lee, Jason Clarke, and Game of Thrones‘ Emilia Clarke. Smith gained popularity through his portrayal as the young-looking Eleventh Doctor of Doctor Who. He recently parted with the role, which will now be played by Peter Capaldi, after nearly four years of being The Doctor.

Smith’s Doctor frequently acted more childish and silly than previous Doctors, but in some episodes we got a taste of how Smith portrays conflict in his character. The “Nightmare in Silver” episode, penned by Neil Gaiman, gave Smith the role of playing two very different characters in the same episode, and it showed Smith is a skilled actor capable of playing villains as well as heroes. While The Doctor was nutty, he also carried a lot of guilt and regret.

The Terminator reboot will be another three movies, and Smith’s role will grow with each film. It will also have time traveling robots, making Smith’s casting amusing coincidentally. “We don’t have a TARDIS, but we do have a Time Lord,” Skydance Productions tweeted earlier today.

Terminator: Genesis is scheduled to release in July 2015.