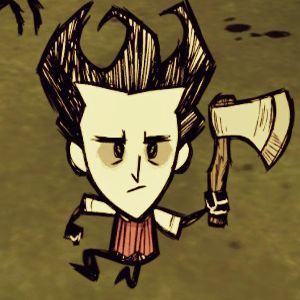 Survival simulators are all the rage right now, thanks in no small part to the success of crafting games like MineCraft and Terraria. The idea of scrabbling for resources in the day and booking it to base camp before the dangerous night falls has proven popular with the PC gaming masses. That said, there can always be too much of a good thing.

Rust, Seven Days to Die, Starbound, and a ton of lesser known games are all vying for your attention, offering nail-biting perils and the chance to rough it in the wilderness. It’s going to be harder and harder for such games to stand out, but at least one game has managed it effortlessly, benefiting greatly from a terrific sense of humor and a gorgeous artistic style.

Don’t Starve has delighted PC gamers for months, and has proven beloved enough to capture Sony’s attention. One of the first indie games revealed for PlayStation 4, Klei Entertainment’s starve-em-up makes a strong debut as a freebie for PlayStation Plus subscribers, and offers a pretty decent console version of a critically lauded PC title.

One of the more harsh survival games out there, Don’t Starve drops players onto a brutal island dystopia with a single major goal – don’t starve… or get bitten to pieces by spiders, or go insane from isolation, or get trapped without a light source at night, or piss off the pig men, or indeed do any of the many things that will kill you. Death in Don’t Starve is, generally, the final word. A few chances for limited resurrections are offered, but there always comes a time when you die, and are dead for good. If you succumb to the elements one too many times, you’ll have to start the game again.

Permadeath is a staple of roguelikes, but in a game like Don’t Starve, where there’s a lot of crafting, building of bases, and acquiring tons of stuff, there’s something extra disheartening about dying. The thought of losing all one’s progress certainly makes death a more terrifying prospect, but unlike your regular roguelikes, where getting back into the game is a quick and dirty affair, it can be hard to muster the willpower to jump right back into Don’t Starve after watching your hard work disappear into oblivion. Still, while you’re actually alive, the threat of unforgiving death makes for some nerve-wracking tension. 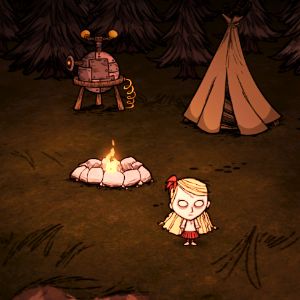 Opportunities to become acquainted with mortality are plentiful in the world of Don’t Starve. The player character’s body is a demanding taskmaster, and food can often do remarkably little to refill it. Hunting for food is a constant battle, whether one is picking berries, planting crops, or trapping and cooking animals. Not even I eat as much as the inhabitants of this island, but if one forgets to monitor the growling bellies of their avatars for just a few minutes, it can mean the end of the adventure.

As well as hunting for food, players can gather environmental resources to build stuff. Twigs and stones can be turned into a fire pit, flint can be used to craft axes and pickaxes, which in turn can be used to acquire locks and minerals. The more resources players obtain, the more complex things can be crafted, from weaponry, to farms, to items of clothing that can offer passive benefits. The slow and steady player will be able to build an impressive little base of operations, rich in crop growth, defenses, and scientific machinery that facilitates the building of even better gear.

Like all good crafting/survival games, there’s a lot to discover underneath the surface-level objectives. From spelunking to grave robbing, there’s a deceptive amount to do in Don’t Starve. However, one is always limited by the constant pressures of maintaining one’s hunger, sanity, and health. It’s easy to lose all three of these precious stats, and significantly harder to recoup them. Plus, if one doesn’t construct or return to a light source before it gets too dark to see, death can be the only result.

As with everything in Don’t Starve, the constant balancing act of maintaining health levels is both a boon and a hindrance, always contributing to the sense of fear and trepidation, but also providing the risk of demoralizing the player to the point of surrender. Unlike with games such as Terraria, I have a hard time playing Don’t Starve for hours at a time. It’s an oppressive game by design, but that oppression can sometimes dissuade the player from getting too invested. Just as the player struggles to balance their resources and health, so too does the game struggle to balance an intimidating atmosphere with an outright repellent set of restrictions.

Even its most ardent fans should admit that this is a tough nut to crack, but is it worth the effort required? On the whole, I really think it is. At its most successful, Don’t Starve is one of those rare games that manages to marry cute cartoon visuals with bone-chilling horror. It’s incredible just how nerve-wracking the game can be when night closes in and the monsters come out to play. The results of losing sanity, with the world becoming more dangerous and horrific, is beautifully done as well, and the horror is all cut through with a streak of delightfully dark humor. 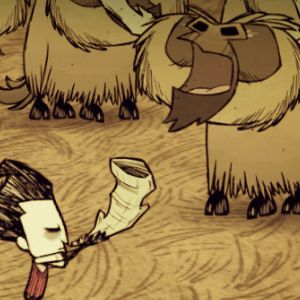 There is, of course, the sense of satisfaction one gets as they build up their resources and get hold of evermore effective equipment, not to mention the general soothing qualities of running around chopping wood all day. The constant danger makes it less cathartic than many crafting games, but it’s still quite nice to start each new day with a plan to gather and hunt, then successfully meet one’s goals before the Sun goes down. Though it’s hard not to feel depressed by the perpetually dismal environment, there’s plenty of opportunity to feel like you’re succeeding, provided you work hard enough and don’t piss off too many beefalo at once.

The controls for Console Edition are about as streamlined as you can get. Shoulder triggers activate crafting and inventory menus, while the right stick cycles through carried gear and the D-pad equips or drops stuff. The use of the D-pad to interact with inventory items is a little awkward, but with the face buttons all given over to environmental interaction, there really wasn’t a better solution on offer. Inventory menus are often the bane of console ports, and all I can say is Klei did a decent job with what it had.

The game looks incredible on the PlayStation 4, and runs smoothly, albeit with a few loading times here and there. All told, it’s a solid port job for a game that marks a very positive step forward in Sony’s recent love affair with indie titles.

Bottom Line: Don’t Starve is a gorgeous, terrifying, often funny game, albeit one that can chew away at the player’s morale with its constant demands and willingness to undo hard work. Provided you go in willing to work hard and take punches on the nose, there’s plenty of reward to be had.

Recommendation: It launched for free on PlayStation Plus, and if you are a subscriber, you absolutely should download it. For those who have to pay, it’s still worth the purchase, provided you go in prepared to have a fight on your hands.

Microsoft’s Phil Spencer: Xbox One Won’t Be The Last Console