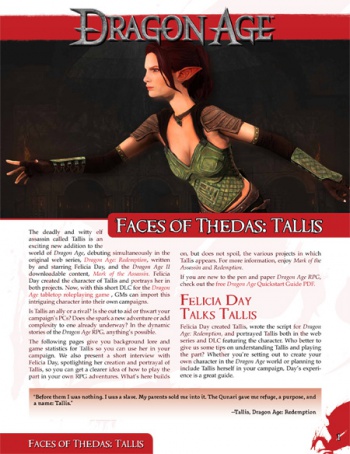 Dragon Age 2 has had a slew of downloadable content released since it hit store shelves in March. The tabletop adaptation of BioWare’s hit RPG hasn’t received anywhere near the same amount of digital content, but that’s about to change, starting with a piece of DLC that’s just launched.

The DLC comes in the form of a PDF file that focuses on Tallis, Felicia Day’s character from the Dragon Age 2 DLC “Mark of the Assassin” and the web series Dragon Age: Redemption. Aside from stats and story suggestions about how to use the character, the PDF also contains an interview with Ms. Day about the character (which she helped create).

The Dragon Age tabletop RPG came out in 2009. While I have yet to play it, a few of my friends picked it up and had good things to say about it (mirroring what’s been said in reviews).

The PDF has just gone live at Green Ronin’s official Dragon Age RPG site, where you can download it for free.

Activision Shares Down Thanks to World of Warcraft Slide