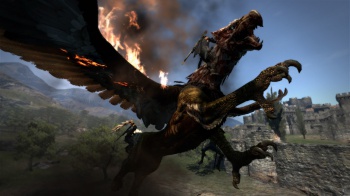 For a mere $40 you can now download the Xbox 360 incarnation of the underappreciated Dragon’s Dogma: Dark Arisen.

Dragon’s Dogma: Dark Arisen will go down in history as one of my favorite games of the current, moribund console generation. I will grant that it’s flawed and many of the game’s central mechanics are unnecessarily obscure, but once you moved beyond these niggling issues, you realize that Capcom has prepared an open-world roleplaying epic unlike any other. It mates the huge scope of Skyrim with the action-focused combat of games like Devil May Cry to create something wholly original, wholly Japanese and most crucially, wholly Capcom.

Now the game is available on Games On Demand. As of now, if you visit the Xbox Live Marketplace and bring up the official Dark Arisen page, you’ll find that you can download the title for $40. As with the retail release of Dark Arisen, that purchase price also grants you access to the original Dragon’s Dogma, as well as the copious number of DLC additions released for it. All told, there’s no hyperbole in saying that you could very easily lose 100 hours in the content Capcom has presented here.

How is this news, you ask? Well honestly, it’s not. But since I’ve got access to the Escapist’s backend, I occasionally get the chance to write up stories on stuff simply because I think it’s neat. This is one of those times. If you have any interest in roleplaying games – particularly the idea of a Japanese take on stereotypically Western roleplaying game tropes – that $40 asking price is absolutely worth it.

Redshirt Preview – Facebooking Across the Universe