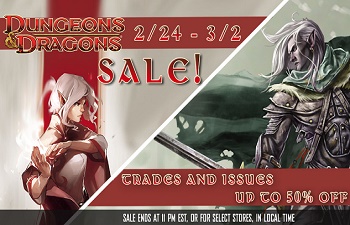 Comixology is hosting a sale on its digital Dungeons & Dragons library until March 2nd.

One of the overlapping problems of both Dungeons & Dragons and comic books is the barrier to entry. It can be easy to look at either or both and find yourself feeling utterly lost just trying to figure where to start. As it happens however, shared problems can occasionally also have shared solutions. If you’re a prospective comic reader/D&D player, for instance, you might be interested in checking out a newly announced sale at Comixology.

The sale, which will run until 11:00PM EST on March 2nd, is offering Comixology customers up to 50 percent off on a variety of digital comics falling under the umbrella of the Dungeons & Dragons license. Included in this will be several digital trade collections, as well as single issues from the Dark Sun, The Legend of Drizzt, Cutter and Legends of Baldur’s Gate series. The single issue comics are being priced at 99 cents apiece

I tend to stick with physical comics but even I’ll admit to being a bit tempted by the deals being offered here. While I love both my comics and my D&D, I’ve only been involved in both for the past few years. As a result, there’s a ton of content that I feel like I want to catch up on but don’t even know where to begin. Having a cheap way like this to test the waters of different comic series is something that’s really appealing from my position. It’d also give me a chance to catch up on Legends of Baldur’s Gate which somehow managed to get all the way up to issue four without my noticing. Take a look at what’s being offered and let us if there’s anything that piques your interest.

A Good Cause: GM Memorial Charity Gives Dozens of Games For $20