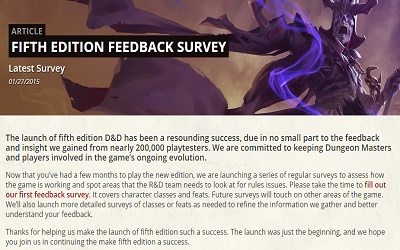 Wizards of the Coast has launched a new survey questioning players about the “classes and feats” of Dungeons & Dragons 5th Edition.

Following the lukewarm response to Dungeons & Dragons‘ 4th Edition, Wizards of the Coast had a lot riding on its follow-up. The company was likely happy, in turn, when the game’s 5th Edition launched last summer and was met by a chorus of tabletop gamers largely happy with the changes it made. Despite this positive reception, the publisher has launched a user survey today aimed at gauging how players feel about the game and ferreting out any potential “rules issues.”

The survey, hosted by SurveyGizmo, opens with some basic inquiries about player satisfaction but then quickly shifts gears into a series of questions focused on the game’s “classes and feats.” This primarily involves comparing the power of several classes (Bard vs. Barbarian, Fighter vs. Paladin, etc.). From there it asks participants to rate their satisfaction with individual classes and feats, giving them the option to skip the ones they don’t have experience with. The company promised that further surveys will also be launched digging more deeply into the individual classes and feats as well as others “[touching] on other areas of the game.”

In other words, if you didn’t like 5th Edition or found things about it that bugged you, this is an opportune time to let Wizards of the Coast know how you feel. What do you think? Are there any class issues annoying you? Any feats you find less than fantastic? Give the survey a gander and let us know.