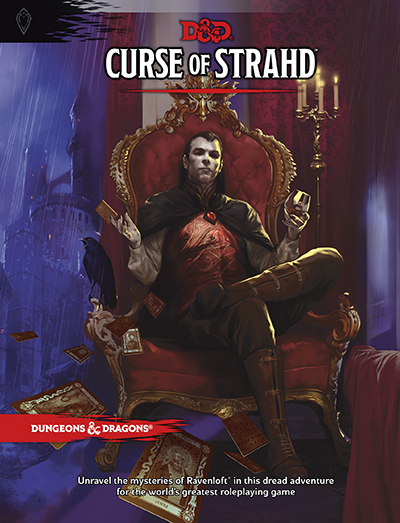 The new Curse of Strahd adventure and supplement book will release on March 15th and cost $49.95.

In 1983, the Dungeons & Dragons module Ravenloft was published. Following players through the gothic Castle Ravenloft, it’s considered by many tabletop gamers to be one of the essential classic D&D adventures. It should serve as no surprise, in turn, that Wizards of the Coast would want to revisit the setting with their highly successful Dungeon & Dragons 5th edition.

In an announcement on Monday, the game company unveiled Curse of Strahd, a campaign and setting supplement releasing on March 15th. The new adventure will return players to Castle Ravenloft and the surrounding countryside of Barovia where they’ll have to “contend with the horrors” of Strahd’s “evil will.” Their only hope will be a fortune-teller named Madam Eva who, drawing random cards from her tarroka deck, will guide the players on adventures to serve Strahd and delay their inevitable deaths “for his amusement.”

Curse of Strahd will be co-written by Tracy and Laura Hickman, the creators of the original Ravenloft adventure module. Speaking about the campaign, WotC story designer Chris Perkins expressed enthusiasm about the adventure and working with the Hickmans. “Tracy and Laura Hickman created a timeless villain whose faults reflect the darkest traits of humanity,” he said. “I can’t begin to describe what it’s like to walk through the halls of Castle Ravenloft with its creators as your guides.”

Curse of Strahd has been designed for players levels 1-10 and will include a variety of supplemental information for fans interested in the lands of Barovia. The book itself is currently available for pre-order and will cost 49.95. According to Wizards of the Coast, the company’s partners at Gale Force 9 will also be producing a purchasable Tarokka deck for players interested in adding some physical flair to their adventures in the horror-laden lands of Strahd.