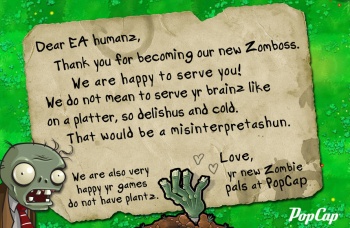 Likewise, PopCap CEO David Roberts lauds the decision, saying, “We picked EA because they have recast their culture around making great digital games. By working with EA, we’ll scale our games and services to deliver more social, mobile, casual fun to an even bigger, global audience.”

Moments ago EA held a financial conference call during which Riccitello specifically cited the immense success PopCap has seen across a wide range of gaming platforms as a key impetus in this decision.

Microtransactions are “clearly the dominant form of payment across Facebook and other social networks,” Riccitello said, as well as “the underpinning of growth in digital business.”

“It would not surprise me to see microtransactions as our largest revenue stream” in the near future, he added.

Though Riccitello was vague on how this agreement would affect the PopCap creative environment, it seems that EA is eager to explore the revenue growth options presented by PopCap’s diverse fanbase, and their theoretical willingness to purchase additional gameplay options.

Done properly, this could add almost unlimited playability options to PopCap’s wildly addictive titles. If, however, PopCap’s new corporate overlords exploit Peggle, Bejeweled and Plants Vs Zombies in the name of the almighty dollar, fans may find themselves far less willing to destroy their productivity via color-coded gems and chlorophyll-thirsty shambling corpses.

In the meantime, PopCap is approaching the announcement with the company’s trademark wit. Whereas EA issued a terse, formal announcement on the subject, PopCap’s PR department would rather let its zombies break the news.

You can find the company’s official word attached to the top-right of this article.

Update: Curious as to how this deal would affect PopCap’s creative environment, we reached out to Garth Chouteau, the firm’s Vice President of Public Relations, who offered the following statement:

I can only say that PopCap will remain an autonomous entity for the foreseeable future, and that EA truly values the creative environment PopCap has cultivated and has no plans to change that. In fact, the expectation on both sides is that EA will bring resources and economies of scale that will enable our game designers and engineers to do an even better job making new games.

In this same vein, PopCap’s website now hosts an open letter to its fans that is equal parts reassuring, and far more witty about this whole situation than anything we professional gaming journalists are likely to write.