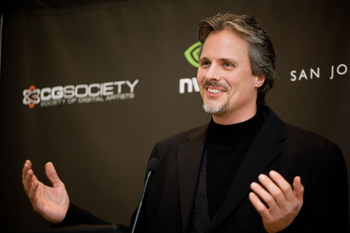 EA refutes Oddworld creator’s claims that it tried to buy his team and suggests Lithium to help with his “paranoia and Tourette syndrome.”

Lorne Lanning has been an exciting interviewee these past few days. Talking at the Eurogamer expo, the Oddworld creator heavily implied that EA had run into trouble with Russian gangsters over the title of Stranger’s Wrath. Later, during an interview with Gamesindustry international, he recounted how he bravely turned down an acquisition offer from EA.

“When you say that to us we go ‘fuck you very much’, quite frankly. That’s not a sustainable model, that’s a hostile acquisition,” Lanning said. “That’s why we had to strive to get independent. Rather than get into bed with someone we knew was a horrible bed partner we said ‘let’s stay virgins for longer’.”

Here’s where things get exciting: EA says that never happened, and responded to Lanning’s comments with a statement that some may find inappropriate.

“We wish Lorne luck on the game and recommend Lithium for the paranoia and Tourette Syndrome,” said EA’s corporate spokesman, Jeff Brown. “Nobody here remembers a jet, a Ferrari or an offer to buy his company.”

Though popularly associated with a compulsion to blurt out random obscenities, Tourette’s syndrome actually covers a wide range of neuropsychiatric symptoms including vocal and physical tics. Because nothing says “funny” like uncontrollable twitching.

Putting aside the wild insensitivity of using a mental illness as an insult, the underlying conflict is interesting: Is EA lying, or was Lanning just trying to boost his indie cred by aiming a few barbs at an acceptable target? EA’s reputation for aggressive studio acquisition does little to help its case, but at the same time, Lanning’s indie posturing is also rather hollow. He fired most of the Oddworld Inhabitants staff at extremely short notice following the release of Stranger’s Wrath, and the company has been a shell of its former self ever since. It’s now chiefly concerned with “directing” HD re-releases of its previous titles, all of which are developed by other teams.