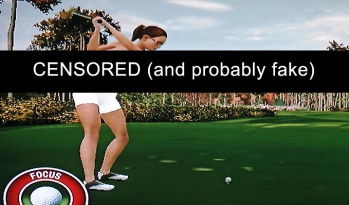 A British woman’s claim of in-game nudity in Tiger Woods PGA Tour 11 is being dismissed by EA as a player hack.

When British Tabloid The Sun reported that there was a nudity “glitch” in Tiger Woods PGA Tour 11, it garnered a few chuckles based on 2009’s sex scandal surrounding the titular athlete. One party that wasn’t laughing, however, was Electronic Arts, and the publisher is denying the issue is actually a part of the game.

According to The Sun, 26-year-old Jo Eley “spent ages” creating an in-game avatar in Tiger Woods PGA Tour 11, which she enjoys playing with her partner. She apparently took a bit of time making sure the avatar looked like her, thanks to “face-mapping technology”, but what she didn’t know was that the character was going to hit the golf course wearing nothing but white hot pants.

You read that right: The character model was completely topless. The Sun reports that Eley “believes a programmer put the secret strip in as a prank following Tiger’s cheating in 2009.”

Meanwhile, Electronic Arts looked into issue and told The Sun the following: “We have extensively investigated and have determined that this situation is not possible through a retail copy of the game. The player model is clearly modified as a result of hacking.”

If this was actually the result of a player hack, I wouldn’t want to be in Eley’s shoes right now, especially after publicly smearing EA’s game.

Source: The Sun (NSFW) via Eurogamer