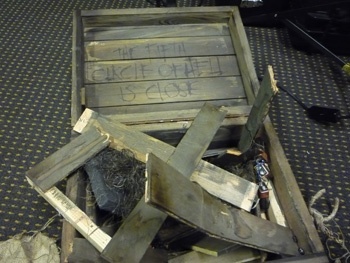 Yahtzee was pretty angry at the package that EA sent him today, but don’t worry – that was the whole point.

It seemed pretty obvious that the wooden box addressed to Yahtzee had something to do with Dante’s Inferno, given that the inside of the lid read “The Fifth Circle of Hell Is Close.” Members of The Escapist staff crowded around the box, eager to find out what was inside. We were somewhat bemused to discover nothing but a small burlap bundle containing safety goggles and a ball peen hammer.

Then the music began, and it all became horrifically clear.

“Never Gonna Give You Up…”

We all got a good chuckle as we realized that EA had just managed to Rickroll Yahtzee through the mail, but our laughter quickly died out when we discovered that closing the box didn’t shut off the song. Yahtzee looked at us, then at the box, then at the hammer in his hand.

And then he got to work.

Strapping on the goggles (he is nothing if not conscientious about safety), he set about smashing the box. He had to break through three layers of wood, bones, and insects, but he finally got to the sound box’s guts and yanked out one of the batteries. He also found a small scroll that had been tucked into the musical workings, which read:

The sin of wrath is yours. You have succumbed to anger and opened an infernal spring that seethes with dark waters. Quelled not, your anger begot rage. The waters have risen unchecked and ye will be drowned in stinking mire.

Ok, so the note is a bit heavy-handed, but I’m still giving this round of Dante’s Inferno publicity a thumbs up for overall creativity and cleverness. Besides, it’s not every day you get to see Yahtzee smash something to bits with a hammer.