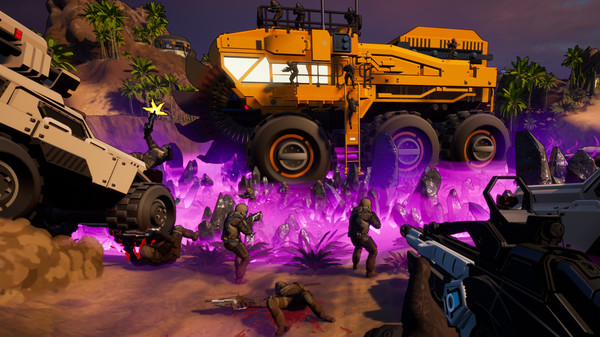 Earthbreakers is a Command & Conquer: Renegade spiritual successor from developers who worked on the original game. With a much more vibrant art style this time around, Earthbreakers promises to expand on the elements introduced in the Command & Conquer FPS from 2002. In other words, developer Petroglyph Games’ staff will be picking up right where they left off 17 years ago.

Check out some of the game’s first footage below.

The game’s Steam page describes a team-based PvP title that “combines the most enjoyable elements of FPS and RTS.” Players will build and expand bases on a 2060 sci-fi Earth while also serving as a frontline protector from enemy factions. With up to 32 players per team, Earthbreakers promises unique RTS gameplay on an epic scale:

Earthbreakers race to collect Vilothyte wherever it is exposed! The game locations will be varied and present new obstacles. Each map will include two full base layouts, capturable locations, natural hazards, sniping positions, and unique elements that can help or hinder your battle plans.

Westwood Studios, the team’s previous studio, shut down after Command & Conquer: Renegade and Earth & Beyond’s sales failed to live up to EA’s expectations. Petroglyph Games was then formed from some of the former Westwood Studios team shortly after in 2003.

Petroglyph is also working on Command & Conquer: Remastered for EA. Last month, the publisher shared what some of the remaster’s updated graphics will look like upon release.

Earthbreakers is set to launch on PC in 2020.

Is Binging Still the Future of How Streaming TV Series Release?