Echoes of Aetheria opens with a royal wedding, marrying not only two young lovers but also two rivaling nations. The celebration is short-lived, however, as the bride is captured by mysterious strangers shortly after the marriage becomes official. Her new brother-in-law, Lucian, embarks on a dangerous trek in order to rescue the missing bride and reunite her with her family. Before long, innocent people are framed and a series of small disputes lead to a full-blown war – with you at the head of a rebellion army. Things are seldom what they seem – and this sentiment is a continuous theme in Echoes of Aetheria. 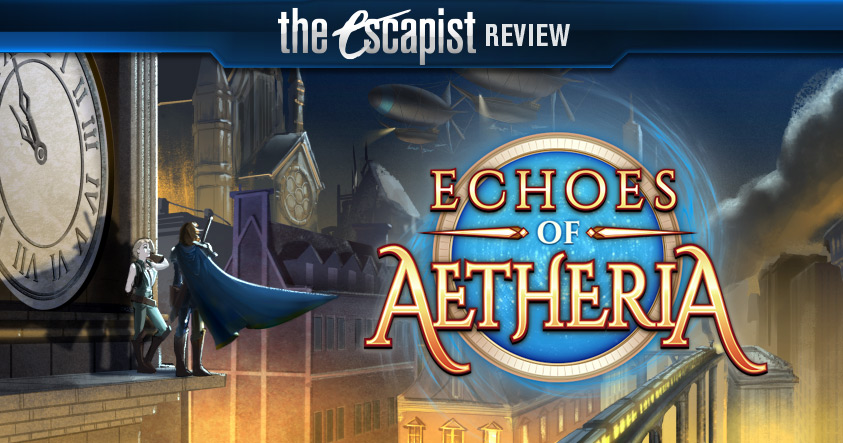 A cursory glance reveals a simple story of heroes and villains, peace and war, treason and defense of country. However, upon delving into the lands and lores of Echoes of Aetheria, one discovers that there is not a single story to the game, but rather many small threads, interwoven into a cohesive and surprisingly unpredictable experience. Enemies may present as friends, allies may turn to villainy, and other characters remain pure mysteries, dancing between the lines of benevolence and wickedness. There is no definitive war of good versus evil; rather, everyone falls into varying degrees of gray. Power, loyalty, defiance, and revenge are common themes, but the game manages to never feel overcrowded. The story – and the enemy – changes quite regularly, and yet manages to feel seamless.

While the majority of story and dialogue may focus on Lucian, much time is spent with other characters individually, giving us a glimpse into their lives, their loves, and their losses. The characters also interact with one another individually quite regularly throughout the game, with the dialogue – and relationships – fluctuating in a way that feels organic. The characters in Echoes of Aetheria are the heart and soul of the game. Each member of your party is fleshed out, bringing their own histories, flaws, hopes, and motivations to the battle. Certain conversations, and relationships, tend to feel a bit forced, with dialogue bouncing between a natural flow and forced-feeling cheesiness. 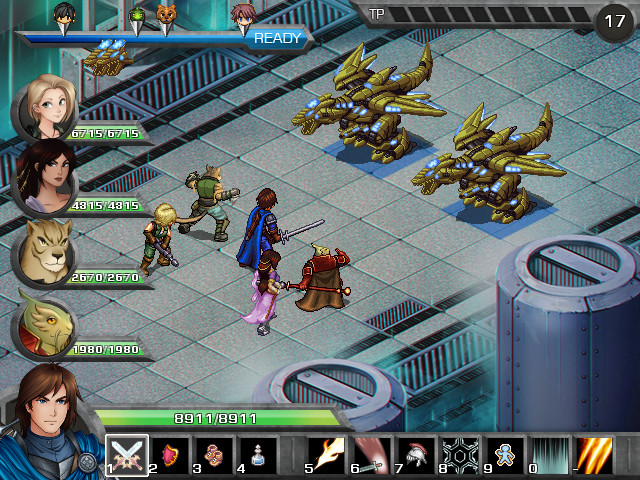 Combat is turn-based, utilizing a 15 tile system on both sides of the battlefield. Every part of combat – from attacks chosen to skill point distribution, character placement and formation to weapon and armor augmentation – requires tactical planning. Since your character is constantly gaining new abilities over time, yet only a limited number are available per battle, skill points can be redistributed at will. The enemies are regularly changing, with some having specific resistance to certain attacks, and others having barriers in place that require special moves in order to weaken their defensive shields, so your characters must change along with them. The characters each share TP, which builds during the course of the battle and can be used to unleash stronger attacks. The biggest issue with combat is from a design perspective: in some full levels, enemies closer to the front right part of the field have their health bars partially – or even completely – obscured by immovable scenery surrounding the tiles. This makes it difficult to gauge the effectiveness of a certain attack, and even more difficult to determine whether to use a stronger move at the risk of using more TP than necessary. This became more of a problem near the end, as the enemies grew stronger and more varied.

One thing I found quite irritating was the limit on the quantity of certain items you can carry. I could mine gems and purchase augmentations to my heart’s content and never heard a word against it, but perish the thought of me trying to carry more than 20 of any specific first aid item. These items are virtually nonexistent in travel, and mostly exist as purchasable items from shopkeepers on bases – which cannot be visited during quests, lest you lose your progress. Sprinkling a few more stimulants throughout levels, or allowing for the ability to carry more, would definitely be an improvement. This is not a huge issue in the beginning of the game, but the enemies in Echoes of Aetheria vary drastically in difficulty. Early battles felt overly simple, but by the end I was facing a half dozen mechanical spiders that are all throwing the dreaded “8 Legs” move at me, and I may have possibly invented a few new curse words trying to take them down. The option of replenishing my first aid stock – particularly since these hellspawns aren’t even bosses – would have been nice. 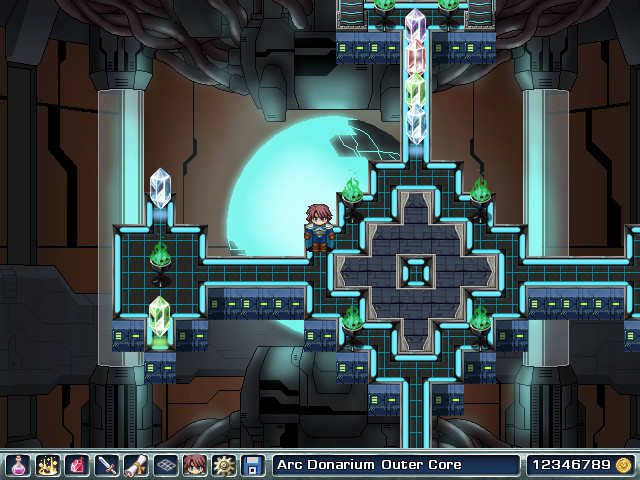 The crafting system in Echoes of Aetheria is extensive and varied, allowing for the creation and augmentation of countless items. Weapons and gear can be forged with precious metals and gems, all of which provide unique enhancements. Additional items can be added to weapons and armor in order to grant additional powers, including rendering an enemy more susceptible to ice and fire attacks, or reducing the weight of an item, which impacts the speed with which your character is prepared for a new attack. Every different combination, no matter how slight, has a huge effect on how the item will operate under a variety of different circumstances, and I spent hours slaving away over an iron making as many different items as possible in order to find exactly what would compliment every possible build for each character best.

The levels are made up of labyrinthine paths, peppered with the added challenges of locating color coded switches, teleporting between numerous pods in order to navigate through the stage, ascending and descending a number of ladders, and frequently a key must be obtained from one of many chests within the levels in order to progress. The levels are challenging – during one level, I was on the lowest floor, viewing the area that I needed to reach. I paid close attention when I made my way up to the top level, was blocked in with the option of only using a single teleportation pod, and was transferred across the stage, loosing track of where I was. There is a thin line between challenging and soul-crushingly frustrating, and while Echoes of Aetheria may tap dance along that line, it never quite crossed it.

Echoes of Aetheria is a spellbinding game that features challenging and tactical combat, beautiful environments, and a deep, engaging story. There are some design issues that complicate an otherwise enjoyable combat experience, but it is overall a strong, fleshed out game. It is also one of the finest examples in my recent memory of a truly excellent RPG Maker game, leaving me excited for what Dancing Dragon will do next.

Bottom Line: Echoes of Aetheria weaves narrative, combat, and exploration together wonderfully, with no one aspect of the game overshadowing another. However, dialogue is occasionally cheesy and design flaws cast a shadow on what is meant to be a tactical combat experience.

Recommendation: Echoes of Aetheria is definitely a game worth playing. The game is strong despite its flaws, and – most importantly – it’s fun, if not always fair.