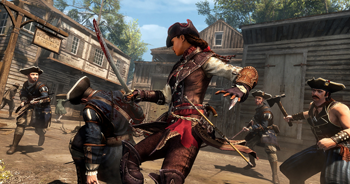 Between Far Cry 4 and Assassin’s Creed Unity, Ubisoft had a very impressive showing at E3 2014. Both games were winners of The Escapist‘s Best of E3 awards, and deservedly so–they’re both looking great. Still, it was hard to give two awards to a publisher that just days earlier had said its games wouldn’t have playable female characters because it’s too much work, especially with three women (Carly Smith, Andrea Rene, and me) in The Escapist‘s voting pool.

Ubisoft is far from the first publisher to make this flimsy excuse, and maybe it’s because we’ve heard this shit too many times that it led to an uproar across the gaming industry. The #womenaretoohardtoanimate hashtag started trending on Twitter, with many developers, journalists, and fans weighing in on whether or not putting women in games was, in fact, too much work.

FYI no one actually thinks #womenaretoohardtoanimate thanks for throwing animators under the bus, guys— Christiaan Moleman (@ninjadodo) June 14, 2014

But let’s pretend for a second that the “it’s too hard” excuse wasn’t total bullshit. So what? That’s your problem, publishers; it’s time to do your jobs. Include women characters in your budget. Allocate resources to bring these characters to life. Just make it happen. By saying it’s too much work to put women in games, what you’re actually saying is women aren’t worth the effort, and that feels really, really shitty. I love Assassin’s Creed, but how long will it be before I decide any publisher who makes this weak excuse isn’t worth the effort of spending money on its games?

#womenaretoohardtoanimate cause, you know…they take so long to get ready before going to assassinate someone #assassinscreedunity— Khaleesi (@thegamergoddess) June 11, 2014

Anyone saying that female VO casting takes any more time/resources than male VO casting, unless they're only using instudio talent, is lying— Anthony Burch (@reverendanthony) June 11, 2014

Thankfully, most of the publishers making noteworthy games at this year’s E3 weren’t neglectful of the fact that nearly half the gaming population is female. Over 50% of our Best of Show games had playable female characters, with BioWare’s Dragon Age Inquisition a particular standout: both Greg Tito and Carly Smith reported playing as different female characters. Along with the recent crop of games with playable ladies, this only highlights that the “it’s too much work” excuse is complete nonsense. If it’s not too much work for BioWare, Respawn Entertainment, Bethesda, Double Fine, Gearbox, and more developers and publishers than I can even name here, then why can’t Ubisoft, one of the biggest third-party video game publishers in the world, pull it off?

I’m not advocating that 100% of games should have female protagonists, or that every single release should find a way to shoehorn a lady character or two into the story just to appease gamers. But when it makes sense–and in a story about assassins in the French Revolution, it absolutely does–why wouldn’t you put playable women in there, especially in co-op or multiplayer? I’m not a game designer, so even though Ubi’s excuses reek of bullshit, I can’t say with 100% certainly that animating women is too hard. I can say that it’s time to get over it and make it work, whatever it takes–and this also goes for every other publisher who’s ever made this excuse.

It’s 2014. The notion that games are for boys is long over. It’s bad enough that women gamers have to deal with sexism and harassment from random dudes on the internet–we shouldn’t have to find the same ignorance in our favorite games.