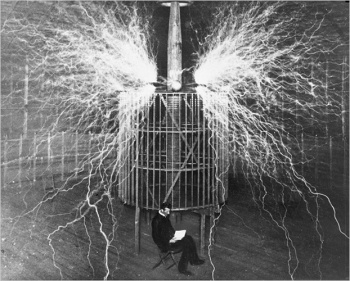 Though it only recently launched Kinect, Microsoft is already working toward the next evolution in gaming control: electromagnetism.

Look around you. It doesn’t really matter whether you’re at home or at work, as either place will almost definitely be covered in electrical outlets, light fixtures, computers, clocks and all kinds of other gadgets. Outside the window there are probably electrical lines running up and down the street.

Thanks to all of these modern conveniences, almost every building in existence is covered in electromagnetic fields.

Seeking to exploit this, Microsoft’s team of researchers has developed a device that detects a person’s position in relation to these fields. By attaching the proper sensors to household electronics, the software giant hopes to make turning on a blender as simple as pointing to the machine from across the room.

Home automation is neat, but the really enticing application of this technology is in the researchers’ proposed videogame integration. In theory at least, the system should be able to offer gamers a Kinect-like experience, in which interaction with the console is handled entirely with gestures, only without any need to stand in front of a camera. Instead of restricting your gameplay experience to a peripheral’s field of vision, you’d suddenly have your entire home to interact with.

New Scientist also cites the possibilities this tech offers for integration into every day, real-world activities – even those that take place outdoors:

The system could even be used outside, since electromagentic radiation from power lines generates voltages that the sensor can track. If the sensor could communicate with an online library of gesture signatures, users could extract information from the environment. For example, the system could be used to send a text message with bus arrival times to any user that touched a certain part of a bus stop.

Of course, like Kinect (and Sony’s Move system, and the Nintendo Wii, and any other non-standard control mechanism since the beginning of time), this new technology really doesn’t signify anything until someone writes useful software for it. Tech demos are fun, but until I’m controlling a spaceship in Mass Effect 5 by pressing non-existent buttons virtually overlaid on my sleeping cat, cautious optimism is the most I can muster.