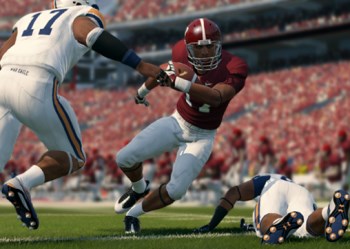 Electronic Arts’ $27 million settlement in an antitrust lawsuit has been delayed over an objection to the lawyer’s fees.

In July of last year, Electronic Arts agreed to settle an antitrust lawsuit, originally filed five years ago over its dominance of the football videogame market (that’d be American football), by giving up control of the NCAA and AFL licenses for a period of five years and paying out up to $27 million to eligible consumers. It sounds like a lot but it wasn’t much of a payday for individuals: People who had purchased an eligible football game for the GameCube, PlayStation 2 or Xbox could claim up to $6.79 per game, while owners of current-gen titles were eligible for just $1.95 per game. That amount eventually tripled, which is still a pittance, but a deal’s a deal and that, so it seemed, was that.

But now the whole thing has ground to a halt over an objection filed by one Aaron Miller, who believes that the attorney’s fees in the case are out of line. Miller’s objection was originally dismissed but he appealed that dismissal to the U.S. Court of Appeals for the Ninth District, where the matter now awaits adjudication. Miller is being represented by Steve A. Miller, who one person familiar with the situation described as a “professional objector.”

Regardless of his lawyer’s reputation or the merits of his objection, no payouts can be made until the matter is settled. Miller (the lawyer) must submit his brief to the court by October 7, after which opposing counsel will have a month to respond. Things will then presumably proceed at the court’s discretion, and while the money on the table isn’t going to save anyone from foreclosure, twenty bucks is twenty bucks – and if you’re a claimant, you’ll be lucky to get it by Christmas.