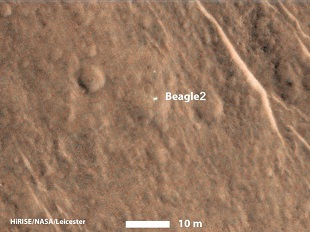 NASA’s Mars Reconnaissance Orbiter has found the derelict craft, not heard from since late 2003.

With all the talk of Mars colonization and exploration in 2014, it’s important to remember that the likes of NASA and the European Space Agency have been hard at work exploring the planet for years.

Case in point: The Beagle 2 lander, dropped on the Red Planet in December 2003, has just been rediscovered by NASA’s Mars Reconnaissance Orbiter (MRO) satellite. The Beagle 2 was never heard from again after being dropped onto Mars by the ESA’s Mars Express spacecraft, with project leaders never getting a full explanation of what happened. But with the new satellite imagery, the ESA can see that the lander touched down, and looks largely intact.

“We are very happy to learn that Beagle 2 touched down on Mars,” said ESA Science and Robotic Exploration director Alvaro Giménez.”The dedication of the various teams in studying high-resolution images in order to find the lander is inspiring.”

Images, like the GIF seen here, show the lander, and what could be its parachute, and its rear cover.

Since Beagle 2 is only 2 meters across when fully deployed, searching for the lander had proven difficult. Both the Mars Express craft and NASA’s older Odyssey orbiter tried and failed to find the lander.

“It means closure to me,” said Beagle 2 mission manager Mark Sims to the BBC. “Christmas day 2003 was a real disappointment…I’ve always wondered every Christmas day since what happened to Beagle 2. We’ve now got very good evidence that it made it successfully to the surface of Mars, which is amazing.”

Hatred Rated Adults Only by the ESRB