This is probably the most unapologetically teenage thing anyone can possibly say, but there are still aspects of the world that make me wonder if everyone else was given a different instruction manual to me. Case in point is the fact that there’s an entire genre of “fantasy” which for some reason feels it has to force itself to fit within rigidly-defined presets. That creators set out to create an utterly fictional world of make-believe where the whole functionality of magic literally allows for any scenario the mind can conjure, but always seem to end up ripping off The Lord of the Rings because that’s what people expect. People actually have pre-determined expectations of a fantasy. Doesn’t that sentence strike anyone else as completely off the trolley pipe?

It’s almost as bad as when every shooter not too long ago was set in the Second World War. Or indeed how every shooter these days is set in a hypothetical Third World War started by Russian terrorists (not that we’re saying Russians are more likely to be terrorists but we totally are). Kingdoms of Amalur could very easily be happening two meadows over from any given scene in World of Warcraft (or even the same meadow). Dragon Age could be going on in the next continent assuming the economy’s a bit more depressed over there and the local populace all evolved in parallel with broomsticks up their arses. I remember hearing the developers of World of Warcraft talk about how they wanted their dwarves to get away from the cliché of being technological earthy sorts and make them a bit more of a spiritual people, and all I could say was, if you wanted to get away from cliché, couldn’t you just not have made it about elves and dwarves? Couldn’t you have made it about robots and puddings on legs?

Maybe I didn’t play enough D&D as a teenager to have a constant immovable nostalgic demand for swords and sorcery, or maybe it’s just that I can’t take any standard fantasy setting seriously because I grew up reading Terry Pratchett books, but this really does mystify me. How about new settings? Or if that’s too much to ask, old settings that haven’t been explored much lately? Two spring to mind. Here they are in no particularly order.

What seems to be a recurring issue with standard fantasy games these days is that it’s difficult to penetrate. There’s this weird fascination with starting them in medias res, too, dumping a load of backstory on us right from the word go about how the bad elves have been waging war against the pudding on legs people or whatever so we have to piece things together on the way. And the main character’s usually some empty-headed prick who’s been living in this world his entire life but still needs to have situations explained to him because I guess he never paid attention in burly warrior school.

Just putting this out there, but surely a plot like that is both easier to tell and easier to get into if the main character is, say, a Dixons employee magically transported by twist of fate when he was walking down the wrong alley on his way home one night. Many works of literature that centralize the exploration of a strange other world – Alice’s Adventures in Wonderland, Gulliver’s Travels, A Princess of Mars, Hitch-Hiker’s Guide To The Galaxy – feature as their protagonist a displaced contemporary lad or lassie of the era. Because it creates an automatic attachment for the audience if there’s someone like us who needs things explained. And I can’t think of many games that have done that sort of thing lately. Dark Void and Prey, I suppose, if we count sci-fi. 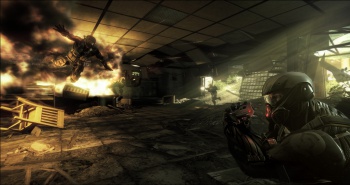 Alternatively there’s the full-on “contemporary fantasy” thing of having fantastical elements in an otherwise recognizable world, as in the Dresden Files or Neil Gaiman’s Neverwhere. Not just a fantastical thing invading a real-world setting, like The Darkness or Crysis 2, but a modern world where magic and monsters have always existed and are just kind of there. I can’t think of many video games that do that, except maybe Shadowrun on the Genesis. Imagine if you played out the plot of The Lord of the Rings in a modern-day city, like Frodo has to journey to the top of Skyscraper Doom to see if he can get better cellphone reception.

Steampunk as a concept is by no means ill-served by video games and hipster twats, games like Bioshock even delve into the related electropunk genre, but one thing I haven’t seen done in a good long time is a steampunk game about space travel. The only ones that come to mind are Worlds of Ultima: Martian Dreams and this one incredibly shit game I played once on the Amiga that was based on the Space 1889 pen and paper RPG setting.

I know I sound like a stuck record sometimes saying there need to be more organic free-roaming space exploration games, actually there’s a pretty good one called Evochron Mercenary been released on Steam not too long ago, but what always tends to get in the way of the fun in such things is that they feel the need to bring all the science up ins. So everything’s ten billion miles from each other and even on short trips you have to set the cruise control and find a book to read for a while. And space combat turns into madly rotating around like a gyroscope hoping for the enemy to come into view for just long enough to shoot at for a second.

Which is fine, but I do think that if you set a game in a vision of space assuming that everything people popularly assumed about it circa 1800 was true, that would be a fine setting indeed for a pulpy, swashbuckling adventure. So the planets of the Solar System would all be inhabited by various colorful civilizations and they’d all be within a few hours’ drive of each other. And in-space battles would be more like naval warfare as you perched along the side of your wooden space ship and fired blunderbusses at oncoming pirates.

I dunno, whatever. I’m just trying to provoke a bit of creative thinking, here. Because it may be true that making a nice comfortable safe elves and dwarves wizard parade might get better sales, from a cultural perspective you have to think about what people are still going to remember a year or so down the line. Will it be the game about the Dixons employee fighting puddings with a blunderbuss? Shitting yes!