The thing about Enslaved is that it sounds like a joke. It really does. The kind of joke smug British comedy writers might come up with to satirize the American movie industry. Like a spoof war movie in which Winston Churchill is recast as a vest-wearing American commando fighting for the love of Queen Elizabeth.

We have an adaptation of an epic Chinese poem about redemption and pilgrimage, but taking place in post-apocalyptic New York with Sun Wukong being played by a bloke the size of two horses taped together, fighting robots and riding a motorbike. With the peace-loving holy man Tripitaka (or Xuanzang) replaced by an unstable vengeance-seeking hot teenage girl with an exposed midriff. Incidentally, what is it with female video game characters and exposed midriffs? It’s like the first thing to get rationed in times of crisis is the bottom four inches of all the world’s baby doll T-shirts.

At least in the example of Too Human the adapted characters from Norse mythology were originally psychotic fucks who spent most of the time fighting and cutting off each other’s tallywhackers. The characters in Encharted – sorry, Enslaved bear no resemblance to their original counterparts, nor do any of the events of the story. Believe it or not, there weren’t many giant robot laser scorpions in Chinese legend.

It’s not like the Monkey King in his original form wouldn’t have made a good video game protagonist. He was a highly skilled warrior but also a staggeringly arrogant prick, not unlike, say, every protagonist from every video game ever, who even possessed a magic cloud that allowed him to double jump. Journey to the West spends a lot of time establishing his character, with all that business of being thrown out of Heaven for being such a douche, getting trapped under a mountain, jumping around inside the palm of Buddha, acquiring more random powers than Superman five minutes before a DC comics publishing deadline, etc. The Monkey in Enslaved doesn’t seem to have much of a character at all. His backstory and motivation are absent without leave and he’s pretty much just a big wooden club tied to the plot with string.

It makes me wonder why creators do this. Adapt works when they don’t intend to follow the source, I mean. In that case, why not just create their own IP? Of course I already know the answer to that question: because new IP doesn’t have “brand identity” and wouldn’t sell as well. But honestly, how many die-hard fans of Journey to the West were waiting on tenterhooks for the videogame adaptation? Even if there were a few, I would put money on them only knowing of it through the TV show.

Cast your mind back to two paragraphs ago when I said the Monkey King would make a good video game protagonist. I stand by that sentence. And I’m also standing by this one coming up: Journey to the West would make a good videogame even if you adapted the story closely. I like to think that the videogame-buying public aren’t so mentally fried that they need there to be giant robot thumping to maintain their interest.

So here’s my idea for a more faithful sci-fi retelling of Journey to the West. The whole sci-fi thing is questionably necessary, Okami shows that you can adapt mythology into a game without having to set it on the Planet of the Apes, but I’m going to go along with Ninja Theory on this one for the sheer creative challenge of it. So here’s a Wikipedia article that gives the synopsis of the original, feel free to compare it to the following. 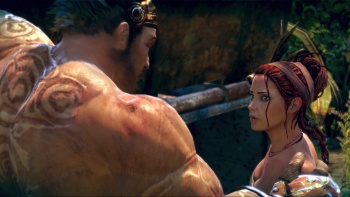 In the far future a vast colony ship has been sent out into deep space to find and colonize a new world, populated by the best and brightest of humanity, and maintained by a fleet of menial robot workers. One of these robots, fuck it, let’s just call him Monkey, becomes self-aware through observing the peaceful, philosophical, hedonistic existences the on-board humans lead. Discontent with his assigned role as an underling Monkeybot starts acting up, abandoning his tasks to rabble-rouse among the other robots and acquire unauthorized upgrades to his system. When he starts becoming too much for the humans to handle, they offer to make him an honorary human being and give him a place among them. In actuality they just make him the personal steward for the high-ranking officers, with no actual rights including him in the human lifestyle, and he soon rebels, using his new access to restricted areas to upgrade himself with vital ship components, threatening the mission. The humans are forced to power him down and put him in vacuum storage. This is all the intro and tutorial, by the way, introducing gameplay through combat with security robots and fetch quests.

Hundreds of years later a missive arrives from Earth, and it is revealed that the colony ship had another purpose: to act as a vast archive of humanity’s culture, knowledge and secrets of living in peace and harmony. At some point after the ship was sent out, Earth suffered a catastrophic series of wars that left everyone bombed back into the stone age, and the archived information on the colony ship is needed in order to get humanity back on its feet. The humans on the ship know that the only thing that can live long enough to escort the needed data all the way back to Earth is a robot. They copy it all into the head of a random menial droid that happens to be called Tripitaka because fuck you. But over time various sinister alien races and Earth separatist groups have harboured reasons to not want the world-changing information to return to humanity, somehow, and Tripitaka himself needs an escort. So they dig their most powerful robot out of mothballs, the Monkeybot, and place a subroutine in his programming that forces him to co-operate (one wonders why they didn’t think of doing that before), before pushing the two of them off in an escape pod (which looks a bit like a horse) and dusting their hands in satisfaction at a job well done.

From there, I’m thinking the game would have a Zelda-y structure, an odyssey through space Star Trek Voyager-style gathering new abilities and allies on the way. There’d be time lapses of centuries in between the main encounters (plenty of opportunities to fill in the blanks with expansion packs, Mr. Producer). Our heroes could explore the universe, go to all kinds of fantastic locations and experience all kinds of different gameplay. Monkey in the story has all kinds of awesome powers that can be made into gameplay mechanics – he can shapeshift into a ridiculous number of forms, creating a sort of Kameo-esque environmental puzzle system, and he of course has that flying cloud, which I will choose to reinterpret as a jetpack. Christ, I love those fucking things.

Perhaps the various locations and encounters could individually be based around the various adventures the gang go on throughout the book. Whatever those were. Confession time – I’ve never actually read Journey to the West. But that’s OK, because neither did Ninja Theory. And if this game ever gets made, you won’t have to either. You’re welcome.