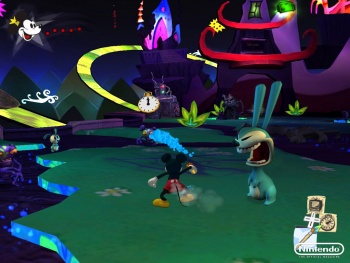 In the beginning of development, Disney Epic Mickey wasn’t even planned to release on the Nintendo Wii at all.

Now that Disney Epic Mickey has been officially announced with screens, art, and details, I thought we could finally take a break from the title for a while. In spite of the recent deluge of information, there are still juicy tidbits about the game’s development to reveal, including the fact that even though Epic Mickey will be Wii-exclusive at release, it wasn’t at first meant for the Wii.

Speaking to Official Nintendo Magazine, Epic Mickey developer Warren Spector revealed: “The reality is that we started Wii development in 2008, but before that we were a PC, PS3, and 360 title.” Spector told Disney Interactive Studios boss Graham Hopper that to develop a true success, “it’d be awfully nice if we could focus on one platform.” Everything was switched up when a Wii port of the game was discussed, with Spector rightfully believing that a regular port wouldn’t cut it due to the unique, arm-flailing nature of the Wii, so Hopper suggested that Epic Mickey go Wii exclusive.

Spector was all for it, and has been enjoying the simplicity of Wii development, further telling ONM, “Being able to focus on gameplay over flashy graphics is kinda nice – almost like the good old days of development. I mean that in an entirely positive way.” Spector says: “[He thinks] that a lot of people missed the boat with the Wii,” choosing to go for extremely futuristic graphics rather than making the best games.

Rumors have been flying about the possibilities of Xbox 360 and PlayStation 3 ports of Disney Epic Mickey, but it looks like if Spector has his way these won’t be necessary at all. If any game has the ability to escape the fact that third-party exclusive Wii games usually don’t sell well (see Madworld and The Conduit), it would be one with the strength of Mickey Mouse behind it. Epic Mickey looks kid and family friendly enough to sell to that market, but with enough grit to appeal to the hardcore community as well. Could Mickey be the next Mario?