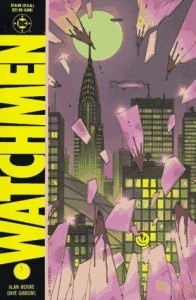 1Up has an exclusive first look at Watchmen, the upcoming videogame prequel to the ground-breaking 12-issue comic book series and movie adaptation.

Coming from Warner Bros. Interactive Entertainment, the game will be released for the Xbox 360, PlayStation 3 and PC, but in an unusual move, it will ship in downloadable episodic format via Xbox Live, PlayStation Network and an undetermined PC digital distribution method. The game will take place several years before the events chronicled in theWatchmen comics, when protagonists Rorschach and Nite Owl are younger and better able to handle the punishing demands of crime fighting. The game can be played in either single-player mode with an A.I.-controlled partner, or in a two-player, split-screen cooperative mode.

The game is described as “bloody and brutal,” and well worth an M (Mature) rating from the ESRB. The two characters will feature unique fighting styles: Rorschach is a “feral, loose cannon” who uses down-and-dirty street fighting techniques and “psychotic special moves” against his opponents, while Nite Owl employs martial arts finesse and the tools in his utility belt to get the job done. In cooperative mode, the game will also feature numerous puzzle elements that require a combined effort to solve.

And while fans of the series may wonder how a Watchmen prequel will fare without Alan Moore at the wheel, Swamp Thing and Wolverine co-creator Len Wein has been brought in to handle the dialog, while Dave Gibbons, the artist on the original Watchmen series, is serving as an advisor. “We’re bringing the Watchmen universe to gamers in a distinct episodic game revealing action and combat for a great overall experience for fans,” said Samantha Ryan, senior vice president at WBIE. “The team is working to develop a high-quality story as well as match the outstanding visual style of the film.”

Few details are available, but 1Up describes the game as “worthy of being a now-generation game, with a lavish, fully-realized night-time city, filled with steamy sewer grates, great lighting effects, convincing Gotham-esque architecture, hazy neon signs and some torrential rain effects.” No dates have been given, but the game’s launch is expected to coincide with the Watchmen theatrical release. 1Up’s complete preview of the forthcoming Watchmen videogame is available here.

Games for Windows Gets Revamped