I talked about Epistory – Typing Chronicles last week, because it served more purpose than entertainment when it was important. If you want to know more about the psychological impact the game can have, definitely check that out. For those looking for a more standard review, you’re in the right place.

Epistory – Typing Chronicles is, as you may expect, a typing game at its core, so if you’re in the market for a more intense genre, this might be best saved for later. Epistory isn’t an exciting game by any stretch, and I think this in itself may be the reason it’s such a strong and impactful experience. It’s a game where you genuinely feel like you’re exploring, instead of simply revealing the map. Exploring in Epistory feels real because there is no world until you explore it. Though I’m sure the map exists in the code, within the world, there is nothing but emptiness and the patches of world you’ve created in your wake. 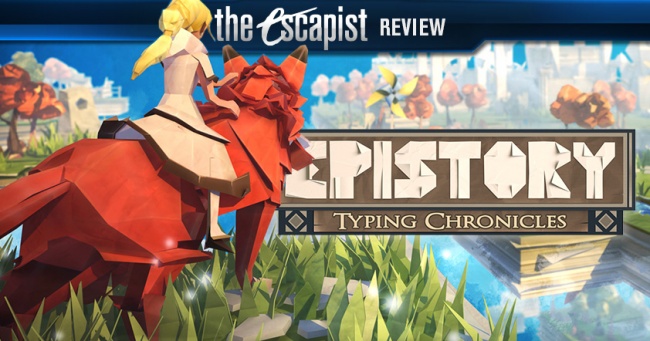 I didn’t discuss the game’s allegory at all in my other writeup, but it’s such a precise execution, the team should be lauded for it. Epistory does an impeccable job of offering an understandable explanation of what it is to write. You enter an empty world, as a writer approaches a blank page. You’ll explore the emptiness and watch it unfold in response to your own input, serving as your own blank slate, waiting to discover its uncertain destiny. Just as any writer must form ideas from nothingness, building blocks that will eventually become their worlds and universes, characters and environments. Epistory doesn’t force feed you the moral of the story, but if you are mindful of it, it’s easily one of the most realistic representations of any creative process you’re likely to encounter.

The origami aesthetic also serves well to set Epistory apart. We’ve all seen the paper swans and the like, but here you’ll see an entire world of paper scraps that bend, twist, and crease until they find their predestined form. It’s gorgeous when it’s static, but it truly feels alive as you watch it unfold. These elements work well independently, but when they’re bound together by the powerful narration, it stops being a collection of parts and becomes a whole experience.

The narrator is perfect in Epistory not necessarily because she’s the greatest voice actor or reads a flawless script, but because the narration fits so naturally within the game’s themes and aesthetic. The script, which guides you through the world and informs you of the most vital information, is more of a poem than a dialogue, and the pacing depends entirely on your actions in the game. The narration continues as you push forward, so the time you spend exploring the areas you’ve already discovered is only accompanied by the soothing ambience. As you pick the trail back up to discover new substance in the emptiness, the narration will rejoin you to guide you on your way. The narrator, for her part, is absolutely brilliant. Even if you’re not paying attention to the words she’s reciting, her gentle cadence and calming tone keep you grounded in the serenity of the experience.

The keyboard-only gameplay isn’t new, but it’s a lot of fun to go back to. I played Typing Tutor on a Tandy in the 80s, and typing hasn’t changed a bit since then, though I have certainly become more proficient myself. Coming from a childhood of command prompts – The Land Before GUIs – I found it nostalgic, though I expect those even just a few years younger than myself will find it less familiar a way to game. Enemies are frequent, but combat isn’t particularly hectic, especially for people that spend most of their time at a keyboard. That’s not to say it won’t challenge you, of course. In addition to the enemies wandering the world, there are extended combat sequences, where you’ll have to beat back waves of baddies trying to swarm you. If even one touches you, it’s game over, so prioritizing targets will give you something to think about. Despite the fact that I spend most of my day sitting at a keyboard, it still felt great to hit a series of enemies back to back with nothing but a few simple keystrokes.

Puzzles are fairly prevalent, though the complexity takes time to ramp up. They tend to be spatial reasoning in nature, so many gamers will find them to be straightforward, though they’ll certainly present a challenge to folks like myself that struggle with that particular approach to problem solving. It won’t likely get past the point of challenging and into the realm of frustration, though, so if you’re wary of that sort of thing, don’t fret too much.

Epistory – Typing Chronicles‘s strength isn’t in what it does. Typing games have been around forever. Origami? Who even knows. It’s not what it does, but how it does it. Which, in a word, is “flawlessly”. It may not be a perfect game in the traditional sense, but as a personal experience that offers valuable insights into the writing process, it’s damn close.

Bottom Line: Epistory doesn’t try to do too much, instead focusing on perfect execution of what it does. The world is gorgeously crafted around you as the narrator lulls you into contentment, but the creeping insect enemies will keep you moving and actively entertained.

Recommendation: If you want to “play” a game, you’ll want to give this a miss. If you relish a thoughtful, insightful experience with some entertaining (and possibly instructional for budding stenographers) gameplay attached, you’ll want to see what Epistory – Typing Chronicles has to offer.