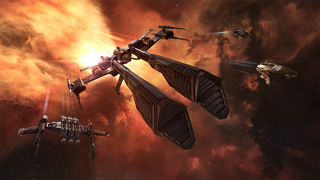 CCP has announced that with the launch of its new Clone States expansion in November, EVE Online will be free-to-play.

If you’ve ever wanted to dive into the world of EVE Online but couldn’t bring yourself to pony up the monthly fee, you’ll finally be able to play for free come November. CCP Games announced today that when the game’s next expansion launches in November, it will include a free-to-play option.

The new Clone States expansion is described by CCP as,

“Cloning scientists in New Eden have been hard at work with the aim of bolstering their military capability of capsuleers for use by the Empires. In the process, they’ve developed a new method of cloning that revolves around two new clone states, Alpha and Omega.”

Alpha clones are the standard state for unsubscribed players. They’ll have access to race-specific skill sets, and will be able to fly tech one Frigates, Destroyers and Cruisers with essential weapons and modules. Their skill training will also take place at a reduced rate.

The Omega clone state is attained by subscribing to the game. It involves “augmenting basic clones using neural expanders and cerebral acceleration technology, granting unlimited skill access.” This state is exactly like being subscribed now.

If you let your subscription lapse, your clone status will revert back to Alpha, and any skills that an Alpha
clone doesn’t have access to will be locked. You won’t lose them, but you will lose access to them. If you re-up your subscription, you’ll get all of those skills back right where you left them.

It will be interesting to see what effect this change has on the total player counts for EVE, as well as the subscriber numbers. You can find a much more in depth look at the upcoming changes in this official blog post.

The Clone States expansion will launch in November of 2016.

Titan Quest: Anniversary Edition Now Available on Steam, and Owners of the Original Get it Free