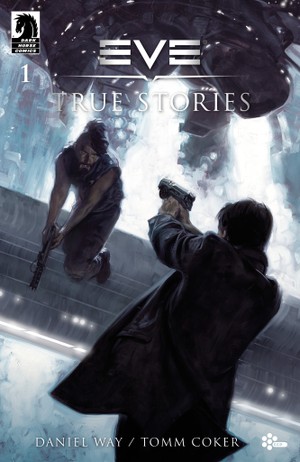 EVE Online is a rare MMO that genuinely surprises its players on a regular basis, usually with emergent events that CCP never accounted for. Coupled with player-led alliances and corporations, EVE now has an extensive in-game history of war, espionage, and accidental space battles that Dark Horse Comics is attempting to recount with EVE: True Stories. At the very least, it should prove more dramatic than reading a wiki summary after the fact, which you can see for yourself thanks to a free first issue from the Dark Horse website.

EVE: True Stories recounts the collapse of the player-led Band of Brothers from the perspective of a rising GoonSwarm alliance. GoonSwarm may be telling its side of the story, but it isn’t covering creative duties here; Daniel Way of Deadpool fame is handling True Stories‘ scriptwriting responsibilities while rotating artists, starting with Daredevil Noir‘s Tomm Coker, provide the visuals. Each issue will be released for free in the coming weeks, with a complete EVE: True Stories graphic novel hitting store shelves this June.

I’m still wrapping my head around the idea that MMO characters can become comic book protagonists, but for the price of free it’s certainly an interesting read. I wouldn’t say it’ll convince you to play EVE if you haven’t already, but it sets up the corporate/space-action dynamic nicely and even has one of those big starship battles you’ve been hearing so much about. Outside of the Dark Horse website, True Stories is available from Dark Horse’s Android and iOS apps, with additional issues launching on all platforms from March to April.

Intelligent Alien Life May Be Found by 2040, SETI Astronomer Believes