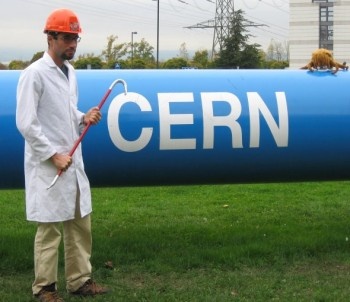 Official investigations estimate the cost to repair the Large Hadron Collider to be in the neighborhood of $14m.

After one ton of helium gas was released accidentally, damaging the electromagnets, there have been calls for an early warning alarm to be put in place. The official investigation showed that an electrical fault in one of the superconductors allowed the release. Better gas pressure valves have been designated as a priority.

This isn’t the first problem to hit the LHC, perhaps the world’s greatest generator of ‘Day Of Reckoning’ forecasts from the more ‘eccentric’ areas of the internet.

Even before the official ‘launch’ day, there was a short glitch in the system that was solved by just turning it off and on again.

Even the great scientists are split over what will happen, with Dr. Stephen Hawking and Professor Higgs almost coming to blows.

Official estimates are that the LHC will be out of action until June 2009 at the earliest, but the possibility of a resonance cascade scenario is still pretty unlikely.