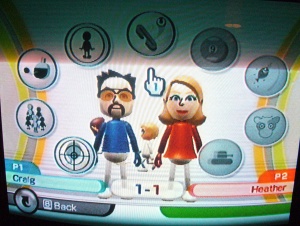 Until Wii Do Us Part

Forget Calphalon pans and that plated cutlery you’ll almost certainly never use after a few months, married couples are now asking for exactly what they want for a wedding present: a Wii.

That’s right, at the top of Amazon’s popular Wedding Registry is everyone’s favorite (and currently unavailable via Amazon) little console that could. Surpassing even the Pyrex 10-Piece Storage Set with Lids, the Wii is set to be the glue in many marriages to come, provided of course one of the spouses isn’t significantly better at Wii Baseball than the other. And trust this author, there is no better foreplay than a sticky round or two of Wii Boxing.