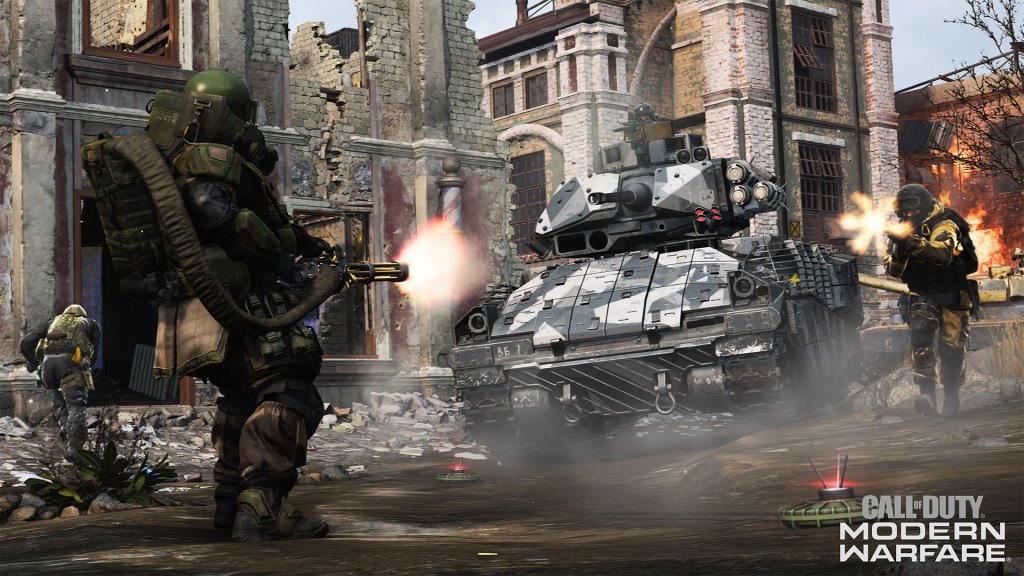 After a trailer opened things up with metal music and teases for what is to come, Infinity Ward’s Joe Cecot and Geoffrey Smith broke down many of the new features coming to Call of Duty: Modern Warfare’s multiplayer mode.

Besides the return of killstreaks like the tactical nuke, perks will also come back for players to choose between when customizing their individual loadouts. With this, Infinity Ward has also taken away the old “Pick 10” mechanic and replaced it with Create-A-Class.

One of the ways the team was able to keep Call of Duty: Modern Warfare’s multiplayer visually unique was the addition of night maps that require the use of night vision goggles to play.

Speaking of maps, Smith says creating realistic maps was more important for them than designing every map to be almost like an arena shooter. So, while some modes may have maps tailored for arena-style play, others are catering to modes like team deathmatch and large-scale battles. Chiefly, there will be maps that are not “three lanes.”

This is where Infinity Ward opted to include a new game mode: Ground War. Ground War will see 100+ players taking on one another on the battlefield, akin to something that would be seen in a Battlefield game. Of course, those who still want classic Call of Duty can look forward to 2v2, 6v6, 10v10, and even 20v20 game modes. And to keep games from getting too stale, Infinity Ward is also overhauling gun customization with the fairly robust Gunsmith feature.

It sounds like Call of Duty: Modern Warfare’s campaign is going to keep a serious tone throughout, but that is not stopping infinity Ward from having some fun in multiplayer. One example of this is the metal music that plays while a player obtains the juggernaut killstreak. The user will be able to go on their rampage while listening to some blood-pumping heavy metal, and others on the outside of the suit can hear the music, too.

Cecot and Smith admit there was a lot of pressure when trying to live up to the Modern Warfare name, so they tried to retain the idea that the game should be “fresh but familiar” during development. This led to a game they feel is a “love letter” to the original Modern Warfare series.

Activision also reminded fans that Call of Duty: Modern Warfare will not have any sort of season pass and announced a beta that is coming next month.

The multiplayer reveal event featured hours of gameplay and only concluded just a little bit ago, so go check out how the game is shaping up.

Call of Duty: Modern Warfare releases on PC, PlayStation 4, and Xbox One Oct. 25.

DCEU: What Was The Crisis? – The Big Picture

The Church in the Darkness – Review in 3 Minutes