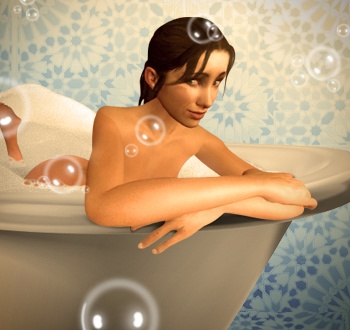 From “Nude Raider” to The Sims to Oblivion, gamers have always been interested in getting their characters to take off their clothes – or at least to look like it.

Humans have a weird relationship with our bodies – specifically, our naked bodies. Sometimes, they’re illegal … depending on where you are in the world. They’re taboo objects of desire, which explains our fascination with celebrity nipslips. And as Brendan Main explores in Issue 238 of The Escapist, they’re frequently included in fan-made patches of various games to get us questing along in a sea of naked breasts – though the implementation thereof can sometimes be a bit… odd.

Certain cases reveal a delightful absurdism. Take a game like The Sims, which capitalizes on this dress-up dynamic. You start with little people living out their daily lives. These daily lives might sometimes involve stripping down, at which point the characters’ naughty bits are discreetly covered with a blur effect. So a patch is created that removes this blur, revealing featureless Barbie-doll bodies. Boring. Then another patch is invented to dress-up these already undressed bodies with the various bits that the creators omitted. Finally, pictures of this last project find their way online, where some images are re-censored because think of the children.

To read more about the history (and not-so-perplexing ubiquity) of the nude mod, check out “Stripping Down the Nude Mod” in Issue 238 of The Escapist.

AVP Could Get Motion Control