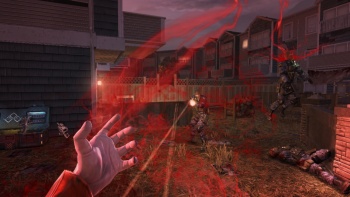 What happens when the villain is a crazy psychic pregnant lady? In F.E.A.R. 3, psychic “contraction waves” alter reality and generally make your life hell.

The F.E.A.R. series has always had hallucinatory sequences where the player is transported to a reality created by the psychic being known as Alma. In F.E.A.R. 3, this alternate reality finally gets a name from the game’s creators: the “Almaverse.” The waves of psychic energy emanating from Alma as she gives birth to the child that you unwittingly conceived with her at the end of F.E.A.R. 2 are her contractions. The contractions will create ripples of reality, spawn monsters, and induce real-world cultists to attack you. Yeah, a pretty standard pregnancy.

The contraction waves create a changing and evolving landscape for the player. “It changes some of the spawning mechanics for enemies, and will also affect the environment or your path by setting the world on fire or creating other hazards,” says Schuller.

Alma’s influence on people and her world can change the fight as each contraction wave rolls through. If you’re fighting against some ATC Security personnel, a wave may spawn Alma-created enemies which will attack both you and them. Some of these events will occur at pre-determined times, but will increase in frequency and randomness as you progress through the game. As Schuller puts it, the contraction waves are a way to “keep things fresh and unpredictable.”

Interestingly, the contraction wave mechanic may make it into F.E.A.R. 3‘s multiplayer modes. “We plan to fully leverage the ideas and mechanics from single player in any way we can for multiplayer,” Schuller says.

Tetris Could Be Our Modern Art