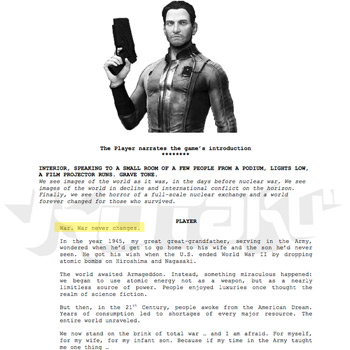 A collection of leaked documents confirms that Bethesda is hard at work on Fallout 4.

Last week, fans of Bethesda’s Fallout series had to double up on their blood pressure medication after a hoaxer revealed that a Fallout 4 teaser site, thesurvivor2299.com, was fake. Today, however, the future doesn’t seem quite as depressing for Fallout players, because we finally have a tangible piece of evidence for the existence of Fallout 4.

The folks over at Kotaku have obtained a collection of documents that are linked to a casting call for a project that’s code-named Institute. The script in question doesn’t contain any direct references to the Fallout series, but it is littered with familiar phrases and mentions several recognizable locales.

The documents also confirm a suspicion that has been swirling around the internet for over a year. Last August, reports that several Bethesda employees were snooping around Boston led gamers to suspect that the next Fallout title would be set in Massachusetts. The leaked script references a militia group called the Commonwealth Minutemen, and those of you who are familiar with Fallout mythology will remember that the Commonwealth is Massachusetts’ post-apocalyptic moniker.

Obviously, this information shouldn’t be confused with an official announcement from Bethesda, but maybe it’ll be enough to cheer people up after last week’s disappointment.