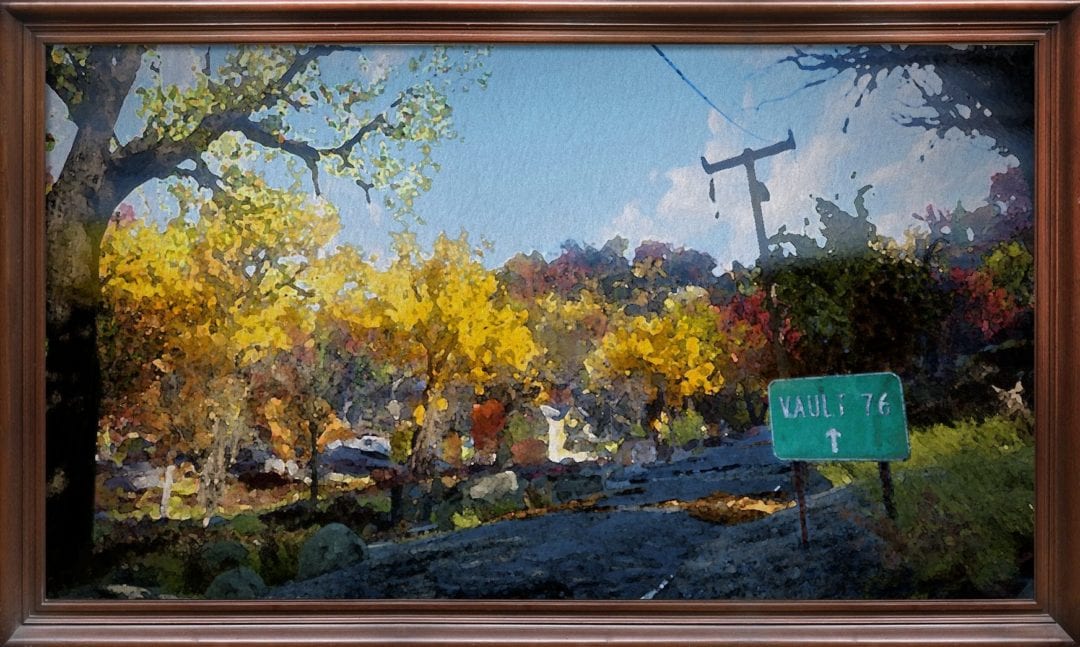 I trudge through the muck and porous earth from Vault 76, emerging into an Appalachia that isn’t as I left it. The sounds and sights are the same, with beams of light piercing the autumn foliage and the sound of locust buzzing through the air like a car alarm spoiling an afternoon nap. This is the place I know, but something is missing. Lost. Like when a sentence is written in English, translated into another language, and then back. It’s technically the same, but something has changed along the way.

I enter the town of Flatwoods only to find ghosts. Not everyone was fortunate enough to escape the ravages of never-changing war. Then again, where would they go? What options do you have for avoiding ruin when it means giving up the only place you’ve ever known?

Bodies and their stories riddle the front porches and roads, each one a tale of hope and promise gone wrong. I’m merely here to pick up the pieces of something I thought I lost along the way. But I begin to realize I never had it in the first place.

This isn’t my home and these people are specters of a life I never wanted. This Appalachia is different and I’m not invited into its embrace. There’s more to see, but for now, I’ll look past the memories.

I keep walking down the road as night approaches. Red eyes glow in the distance.

There are only two interesting things about my southeast Ohio, Appalachian hometown of Gallipolis. The first is that it was a territory settled by French aristocrats and merchants in the late 1700s. That part isn’t interesting until you factor in that this group of French elite fleeing their own country’s revolution — the first one — were sold an undeveloped, false bill of goods. The land deeds they purchased from a speculation company were literally worthless. So, they did what any fledgling American would do: Refused to leave, built defensive fortifications on what is now the city park, and stayed there until President Washington took pity on the so-called “French 500” and offered the settlers free land in nearby Scioto County. A majority rejected the offer and stayed in Gallipolis, but only after purchasing their land a second time.

The other interesting thing? The Silver Bridge collapse in 1967 that killed 46 people.

The massive steel, eyebar bridge connected Gallipolis to its sister town across the Ohio River, Point Pleasant, West Virginia. If that name rings a bell it’s because of the mythos and lore behind the Mothman, state cryptid, and legendary creepy crawly featured in Fallout 76. Some may be surprised to know that the Mothman’s representation in the game is almost true to life: Point Pleasant is Mothman headquarters, with the museum, the statue, and the local obsession all being very much real.

The Silver Bridge Incident was a prosaic, yet tragic event until 1975. Before that point the disaster was mostly known for kicking off a country-wide surge in bridge inspection and protocol, leading to the Federal-Aid Highway Act of 1970. Then, occult sci-fi author John Keel wrote two books between 1970 and 1975 in which the accident was linked to a mutant humanoid known as the Mothman. His second book became a film in 2002 titled The Mothman Prophecies and forever cursed my hometown by linking it to Richard Gere.

Seeing the places and stories of my life in the entertainment that fuels my career is an esoteric experience. It’s one thing for New Yorkers to see their city sprawled across games like Spider-Man every year, but it isn’t the same as seeing the rolling hills and hearing the droning din of Appalachia. It’s not the kind of place represented in media unless it involves a banjo or an uneducated, slack-jawed yokel.

There’s a quiet authenticity to Bethesda’s post-apocalyptic Appalachia, and it comes from an overwhelming sense of loneliness. Both in Fallout and the real world, it’s the kind of place where people go to be left alone, and where you rarely escape under your own terms.

If Fallout 76 has done anything, it has given me the chance to know what it feels like to walk through a digital representation of the place that shaped me, and the land I now feel like a stranger in, even as errant gunshots echo through the woods of my home and remind me of the silence that was growing up in the middle of nowhere.

I spent the first 25 years of my life in Appalachia and memories of that time are like pins on a map, which makes Fallout 76’s Appalachia feel all the more familiar. Family trips through the eastern hills of West Virginia, long drives down the deer carcass-ridden Route 2 highway to Huntington and the golden dome of the Charleston state capitol are all seared in my mind. Strange moments like watching my friends attempt to score pot from strippers outside a Barboursville Waffle House at 3 a.m. rattle around too All the while I could only think about getting out, and the prospect of what happened if I didn’t.

Gallipolis is representative of Appalachia’s small towns, in that it’s a place where the rich come to live in seclusion and the poor stay because there are no better options. Rarely is there an in between. Various think pieces from outlets like the New York Times over the past decade paint a picture of an area with no middle class, and they aren’t wrong. When the two largest employers in the area are Wal-Mart and a hospital system with no competition, it rarely leads to new people coming in, or the old ones getting out. Once a town of near 8,000 people in the 1970’s, the Gallipolis population is now half that, bringing the area’s classification down from town to village.

Appalachia itself is a sparse stretch of territory that calls for a specific type of living and certainly isn’t the kind of place anyone would flock to. Growing up, it took me 25 minutes to drive from my parents 200-acre stretch of woodland into town. The nearest mall was an hour and a half away. The closest airport, two hours. Neighbors are few and far between, and that distance is something Fallout 76 and its absolutely massive map — said to be four times larger than the map in Fallout 4 — recreates shockingly well.

Critical reviews of the game have lambasted Fallout 76 for feeling too empty, whether it be because of the lack of human NPCs or the small server sizes. In reality, this is a perfect, lonely recreation of growing up in Appalachia. The story of emerging from the vault and striking out to find out what happened in the wake of nuclear war strikes a real nerve because the people that did stay were never going to do anything else.

Which is maybe why I felt a pang of guilt the first time I came across Flatwoods only to find the bodies of people trying to do the best they could, their stories literally attached to them. The “Survivor Stories” holotapes found on the citizenry of Flatwoods don’t provide plot, but they do tell a story of people living their lives, up until they weren’t.

I feel this way every time I come home to Gallipolis, which has been less and less in the past five years. I moved away at age 25 for work and love, at the time feeling like I had no true connections to a place that felt more like a prison than a birthplace. Coming home now feels even worse. Being in this place makes me think of a potential version of me that never came to be, all because I made the decision to leave long ago.

I feel this, even more, wandering around Bethesda’s nuclear Appalachia and seeing facsimiles of places from my life, but they aren’t quite right.

The first thing I did in Fallout 76 was head to Point Pleasant. The town across the river from my own, it’s always been a place I felt like I knew. Seeing this not-quite-right digital version elicits more of a reaction than experiencing the real thing. It’s strange to feel nostalgia for my hometown while in a digital world, but having nothing but dread and thoughts of “what if?” when I’m actually there. Funny enough, the most accurate thing in Fallout’s Point Pleasant is the memorial plaque commemorating the Silver Bridge Disaster.

Maybe this dread comes from a worry that I abandoned the people and places that raised me; a type of survivor’s guilt. I fled the decay and didn’t look back while others never had a choice. I left friends behind without so much as a farewell. And yet I still have the temerity to think I’m better off than they are.

This is why I find Fallout 76’s lack of NPCs is appropriately haunting: In the context of the story, these people had no choice. Every corpse is a tale that lingers where it fell. Then again, I feel no remorse for taking control of my life. Perhaps the problem is that I wish I had guilt over leaving, but I actually don’t — like being at a funeral of someone you knew and not being sad. You attend in support, but the emotions aren’t present. You’re a body going through the motions and waiting to exhale.

Fallout 76 makes me wish I felt the pangs of longing for the place of my birth. I hear the game’s signature song “Country Roads” by John Denver and read it not as a longing to return to a magical place, but as a cry to feel something that isn’t there.

Country roads, take me home, to the place I belong.

I wish I belonged but I don’t. And Fallout 76’s Appalachia only serves as a reminder that there’s a hole in me where that feeling should be. I do love Appalachia, but, ultimately, it isn’t my home, or where my heart is.

Perhaps the day will come when I’ll yearn for Gallipolis, when I’m older, but for now, I’ll have to settle for wandering over the golden hills of Fallout’s Appalachia. The sounds and names a reminder of that place always on my mind, but still so far away.

I hear her voice, in the morning hour, she calls me,

The radio reminds me of my home far away.

And driving down the road I get a feeling,

that I should have been home yesterday, yesterday.

William Harrison
Will Harrison is a writer, reporter, and columnist from Toledo, Ohio, by way of Gallipolis, Ohio, and currently living in Austin, Texas with his wife and three cats. He is on Twitter @DoubleUHarrison.

Six Days in Fallujah Wants Games to ‘Grow Up,’ but Its Marketing Is Saying Otherwise