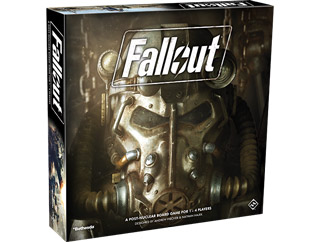 Bethesda and Fantasy Flight Games are teaming up to create an official Fallout board game that will release alter this year.

If you’re ever wanted to bring the Wasteland to your tabletop gaming world, you’re going to get your chance later this year. Fantasy Flight Games has announced that it is creating an official Fallout board game that will release later this year.

Fantasy Flight’s official description reads, “In Fallout, one to four players take on a role within an irradiated landscape inspired by those in Fallout 3, Fallout 4, and their downloadable content expansions. With just a few locations pinpointed on their map, the players choose whether to work together or individually to explore these mysterious regions that lay before them. Along the way, each player will face a wealth of choices, deciding whether to pursue experience or Caps, collect loot or loyal companions, and progress the main questline or veer off to the vaults. As the players move around the board, building their skills and filling their inventory, the area’s warring factions will gain power, forcing the players to pledge loyalty or defy conformity, all in pursuit of gaining the most influence of anyone else in the wasteland.”

You’ll be able to play with up to four players, each playing as one of five different explorers. You could choose to play as a Super Mutant, a Ghoul, or even a member of the Brotherhood of Steel. Players will need to choose to work together to explore the Wasteland, or go it alone. There are factions to appease, quests to complete, and enemies to defeat.

There’s no specific release date for the new board game outside of Q4 2017, but we do know that it will cost $59. You can find all the info in the official announcement over on the Fantasy Flight website.

Hearthstone: Knights of the Frozen Throne Goes Live Today, So Check Out the Final Batch of Cards Here