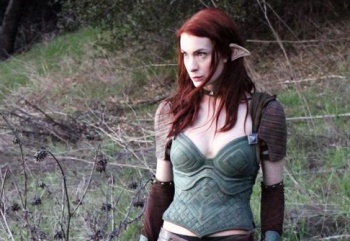 Day says she hopes that her Dragon Age series will make gamers proud.

If you follow Felicia Day – creator and star of The Guild on Twitter, you might have seen her tweeting about a “mystery project.” She hinted that it had something to do with gaming, and she really wasn’t kidding. Day is to star in a six-part web series set in Ferelden, the same world as BioWare’s Dragon Age: Origin.

The series, called Dragon Age: Redemption, casts Day as the elven assassin, Tallis, who is hunting down a renegade mage. The success of the mission is of the utmost importance to Tallis, who risks having her freedom taken away if she fails. Realizing that she can’t do it all by herself, she enlists allies to help her. Day described her character as headstrong and sarcastic, saying that she wanted to bring a modern sensibility to the role.

There’s not a lot of details on the cast just yet, although Doug Jones – who is known for make-up heavy roles, like the Faun in Pan’s Labyrinth or Abe Sapian in Hellboy – will make an appearance. The series was directed by Peter Winther, whose previous work includes production duties on Independence Day and Stargate. He’s also directed a few episodes of the TV show Leverage.

Besides starring in it, Day also wrote the script for the series. She said that she was well aware that videogames don’t normally translate well to live action, so she had tried to make Redemption as faithful as possible. “I am an organic gamer and I love games, and I particularly love this franchise,” she said. “I put every single effort into making this something that gamers will be proud of.” BioWare co-founder Greg Zeschuk said that the studio was excited to work with someone with as much passion for games as Day does.

Dragon Age: Redemption is currently in post-production and begins later this year.

Update: There’s also now a trailer you can watch. It’s firmly in the “teaser” category, but it still gives an idea of what we can expect this summer.