Aside from being the year when the world will be laid to waste by the wrath of Itzcoliuhqui, Aztec God of Darkness (and cold, and volcanos), 2012 is almost certainly the “make or break” year for the superhero as movie star. 2012 boasts undoubtedly the two biggest “events” in the genre’s history: Christopher Nolan’s third (and almost certainly final) Batman movie, a follow-up to biggest-superhero-movie-ever The Dark Knight; and The Avengers, the culmination of Marvel Studios’ unprecendented (by then) six-film gambit to bring the comic book concept of a shared-continuity universe to the screen.

It’s a foregone conclusion that both films – the most anticipated superhero sequel ever and the most ambitious superhero project ever – will be successful by any conventional measure, but they also mark a kind of high point for the genre, one way or another. It’s hard to imagine a higher profile than having Iron Man, Captain America, Thor, The Incredible Hulk, Hawkeye, Black Widow and Batman stomping across the screen in the same year. The question is, is this tipping point the moment where the genre leaves such an impact on the movies that costumed vigilantes join cowboys, WWII soldiers and cops-who-don’t-play-by-the-rules as permanent fixtures of the multiplex? Or is it the moment where moviegoers roundly declare, “Okay, that was delicious, but we’re full, now,” and they instead join foreign legionnaires, pirates and breakdancers as brief trends emerging only sporadically after one short period of pop culture omnipresence.

Regular readers of this column (or viewers of Escape to The Movies) already know that I hope it’s the former – especially since there are so many great characters still yet to be filmed, particularly among the so-called “second tier” players – you know, like Iron Man was before he met Robert Downey Jr. With that in mind, here’s a rundown of brightly-dressed fellows who might not be household names but still deserve their shot at the big screen.

Audiences went nuts for the first Iron Man trailer, and it was a safe bet that most of them had never even heard of him before. It was the concept that connected with them: rich genius, kidnapped by terrorists, builds robot suit to fight them, builds better suit to fight more of them. Damn right, you wanted to see that movie.

DC’s Green Arrow, from where I sit, has the same kind of instantly-“gotten” appeal just waiting to be unleashed, right down to the non-fan-friendly simple setup. Oliver Queen is a vigilante who fights for the poor and underprivileged against the rich and corrupt – not only acting like a modern-day Robin Hood, but dressing the part, too. See? Even without the source material to back it up, that’s a completely viable movie pitch right there. Some characters are simply too hard to explain concisely, but Robin Hood? Everyone knows Robin Hood, and what the association implies.

And if that doesn’t get them into the theater, a flesh and blood actress dressed up like Black Canary will.

Technically, this fella has been filmed. Remember that boyfriend character Ty Burrell played in The Incredible Hulk? That was Doc Samson, though he’s only named in the credits and doesn’t seem to have any of his powers. Short version: Dr. Leonard Samson a psychiatrist who gained superhuman strength (and a nifty green mullet) after being exposed to Hulk-style gamma radiation. Like basically everyone exposed to gamma radiation who isn’t Russian or Bruce Banner, it’s the best thing that’s ever happened to him (see also: The She-Hulk, who actually gets hotter as a Hulk and thus rarely opts to change back) both personally and professionally. Being a licensed therapist who can also snap a hammer-lock on the likes of The Thing is a really, really sought-after skillset in the Marvel Universe of neurotic, mentally-damaged superhumans.

This is one of a few guys on this list that, despite inevitable fandom protestations, would probably work best as a comedy. Just picture it: Uber-muscled, spandex-clad avengers lying on the couch describing their insecurities, buxom fetish-dressed supervillianesses sobbing about their daddy issues, Iron Man calling up because he just found out there’s an open bar at the wedding and he’s “feeling weak” … that’s gold. 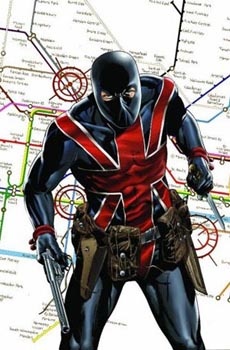 Speaking of ready-made action/comedy, there’s this guy. Michael Jon Carter is a disgraced former football star in the 25th Century. Working as a museum security guard, he comes upon an exhibit on 20th Century superheroes (Superman, Batman, etc.) and has a brainstorm: Travel back in time to that era and use advanced future technology plus knowledge of impending historical events to become a rich and famous costumed crimefighter.

Gee, if he were to subsequently find himself in over his head and have to step up and be a real hero, that’d be sort of like the outline of a pretty-decent movie.

Dr. Stephen Strange, a brilliant but self-absorbed surgeon with a bit of a God complex, loses everything when his hands are permanently injured in a car crash. Seeking out a last-ditch cure among Himalayan mystics, he ends up rescuing a sorcerer – “The Ancient One” – from a disciple’s treason. As reward, Strange receives instructions in the use of magic, becoming the Sorcerer Supreme in charge of holding dark wizards, demons and other new age nuisances at bay.
Shorter version: Doctor Orpheus from The Venture Bros, only not kidding.

Harry Potter meets Iron Man. Yeah, why would anyone want to make a movie of that?

Here’s what I love about this guy: Everything from his name to his origin and power set sounds like something an imaginative six year-old would come up with.

“Buddy” Baker is out hiking in the woods one day when he happens upon a crashed alien spaceship. Extraterrestrial radiation from the ship (in some versions, it blows up) endows him with the psychic ability to temporarily borrow the powers of any animal in close proximity – so, if he’s hunting down criminals and happens upon a random dog, he can “borrow” the dog’s heightened sense of smell, or a fish’s ability to breathe when he jumps into the ocean. Hell, in one story he thwarted some bad guys by borrowing the powers of a germ and divided into a hundred or so copies of himself.

Animal Man largely wandered the DC Universe in obscurity until the late 1980s, when then-newbie scribe Grant Morrison re-invigorated him as (what else?) a crusader for animal rights and a vessel for Morrison’s esoteric fixations – including becoming aware of his existence as a fictional character and a now-legendary story positioning Wile E. Coyote as a Christ figure.

Why should Captain America (or America in general) have all the patriotic superhero fun? Handily summed-up as “Captain America but with more weapons and a British flag motif,” there’ve actually been multiple Union Jacks (pictured) – a mantle passed down through family lineage.

Supposedly, one version or another of him is supposed to turn up or be referenced in the Captain America movie, but either way it’s a great costume and a ready-made star vehicle for the rather large number of British tough guys currently jostling for Jason Statham’s leftovers.

Also known as Carl Lucas, Power Man and The Hero For Hire, it’s actually kind of amazing we haven’t already seen this guy onscreen in some capacity.

Among the more successful 1970s attempts by comic publishers to create new heroes of African-American descent, Carl Lucas was a small-time hood from Harlem trying to go straight who gets framed and sent to prison. While there, he volunteers (under the promise of a reduced sentence) for medical experiments that wind up granting him bullet-proof skin and superhuman strength. Escaping from prison, he assumes the identity and goes into business as a Hero for Hire – i.e. a private eye superhero who does his crimefighting on contract.

Okay, not technically a hero or even a person – in fact, it’s a place – but when it comes to things that are this awesome I’ll bend my own rules.

A “Lost World” jungle hidden in the Antarctic, The Savage Land provides a single yet vital service in the Marvel Universe: Providing a place where various superheroes and villains can fight, hang out and otherwise mingle with pre-historic beasts.

Why should such a place find it’s way into the modern age of comic-inspired films? Hulk fighting a dinosaur, that’s why.