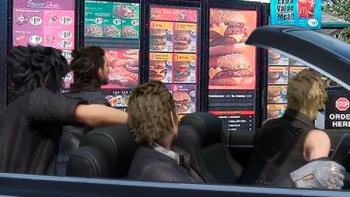 Following that trailer’s release, people on Reddit and social networks began posting edited pictures of the Final Fantasy XV characters in the car looking to the side, such as a picture of the characters in a fast food chain’s drive thru.

Tabata, amused by people’s creations, has released three pictures with transparent backgrounds for people to edit. He encouraged pictures be tagged with #FFXVCOLLA.

Final Fantasy XV will not have a character switching system, Tabata confirmed during the stream. Players will be locked into playing Noctis. Tabata noted PlayStation Store information stated the battle system would allow players to play different characters, which he says is incorrect and apologizes for the error. Square Enix plans to focus on one-character design. An archived version of the stream is available on YouTube.

Square Enix hopes to make a unique battle system for Final Fantasy XV. Tabata explained in the stream that players can do basic attacks by pressing the attack button and then do different actions depending on the directional button pressed. These actions change based on circumstances, such as right timing for guarding or the location of teammates. Players can jump, free run, and defend, though Tabata clarified that auto-guarding and evading consumes MP.

“Even though there are parts from Versus that we have ended up changing, we’ve developed them in more interesting ways,” Tabata said, according to a translation.

The Downward Spiral of Fight Club

How Society Defanged The Vampire